In honor of the twentieth anniversary of 9/11, this landing page brings together various projects, both records of the Museum's physical exhibitions and online resources and projects, that address the history of the original World Trade Center, their destruction, and the rebuilding at Ground Zero in the decades that followed. A brief overview summarizes each project and connects to the pages on our "legacy" website, which in most cases retain their original layout and coding. These pages span from 1997 – that is, within the lifespan of the Twin Towers – to the present. Two special exhibitions, WTC Monument in 2002 and GIANTS: The Twin Towers and the Twentieth Century in 2007, present detailed histories of the design and construction of the World Trade Center, but from the post-9/11 perspective.

The projects are presented chronologically, no matter their media or scope. They range from a large mural in our first temporary exhibition in 1997, Downtown New York, that placed the towers in the history of height, to such team efforts as the Viewing Wall at Ground Zero in 2002, and to installations in our permanent home in Battery Park City after 2004. Other archive projects document and interpret the design and construction of the original World Trade Center and the rebuilding of the site in the two decades after 9/11. 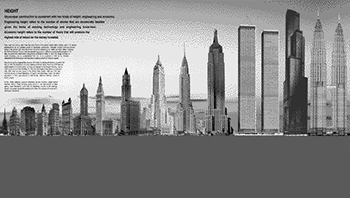 In April 1997, The Skyscraper Museum mounted its debut exhibition Downtown New York: The Architecture of Business, The Business of Buildings, installed in a temporary space, a 6,000-sf banking hall at 44 Wall Street, made vacant by the commercial real estate recession that gripped lower Manhattan in the mid-1990s. The first section presented an 8' x 16' mural that illustrated all the structures from 1890 to 1997 that were, successively, the world's tallest building. Nine were in Lower Manhattan: the World, Manhattan Life Insurance, St. Paul, and Park Row buildings, the Singer Tower, Woolworth Building, 40 Wall Street, and the Twin Towers. 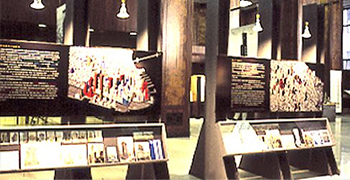 Mounted in the Museum's second temporary location at 14-16 Wall Street, the grand banking hall of the former Bankers Trust Building on the corner of Wall and Nassau Street, the exhibition BIG BUILDINGS examined high-rise size over the last century. While ascending height has attracted the greatest attention, increasing size also characterized the evolution of the skyscraper. The exhibition introduced the categories Jumbos or Super Jumbos to measure size by volume. Of c.70 buildings through history that qualify as Tallest Towers, Jumbos, or Super Jumbos, nearly two-thirds were erected in New York, the world's preeminent skyscraper city.

New York in the 1960s was a city on the rise, and no project symbolized the confidence in "bigger is better" than did the World Trade Center. On completion in 1971 and 1973, the Twin Towers were both the tallest and the largest buildings in the world. Innovative engineering carried the structures to 110 stories, multiplying floorplates of nearly an acre into more than four million square feet of office space in each tower.

The tragedy of 9/11 separates forever a "before and after" in New York's romance with its skyline. Nothing about the World Trade Center will ever be as acutely remembered as its destruction, but there is much to understand in the story of its creation that can inform and inspire our future actions. The reality of what replaces the Twin Towers will be a reflection of the powerful new history that has overtaken the site and, one hopes, of a new form of urban renewal.

In conjunction with the exhibition WTC: Monument, curated by The Skyscraper Museum and presented at the New-York Historical Society, the Museum organized a series of four programs that examined the planning, design, construction, and operation of the complex with talks by many of the original team who created and managed the Twin Towers 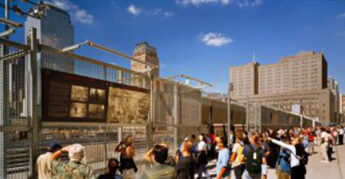 On September 10, 2002, the first phase of the Viewing Wall at Ground Zero was inaugurated at ceremonies commemorating the anniversary of 9/11. The simple design of the wall, a screen-like grid of galvanized steel, allowed visitors to see into the Trade Center site and also carried a series of large fiberglass panels that featured information on the WTC and rebuilding, as well as history panels. The Museum collaborated with the Port Authority, the design firm Pentagram, and the Lower Manhattan Development Corporation (LMDC) to provide the history panels for the Viewing Wall.

In an early installation at its newly inaugurated gallery, The Skyscraper Museum displayed the original model created from 1968-1971 for the Port Authority of New York and New Jersey by the architect Minoru Yamasaki. The only surviving representation of the World Trade Center at this scale of 1:200, the Yamasaki model was on loan to The Skyscraper Museum from The Octagon, the Museum of the American Architectural Foundation in Washington, D.C.

GIANTS: The Twin Towers & the Twentieth Century commemorated the original World Trade Center, viewing its creation in the context of the technological ambitions of the 1960s and the hundred-year evolution of New York’s skyline. Upon their completion in 1971 and 1973, the Twin Towers of the World Trade Center were at once the tallest and largest skyscrapers in the world. Innovative engineering carried the structures to 110 stories – 1368 and 1362 feet (417 and 415 meters) – creating floors an acre in size with more than 4 million square feet per building. By comparison, One WTC, the largest structure built at Ground Zero, contains only 2.6 million square feet, about two-thirds of the area of a single tower. September 11, 2001, defined our memory of the Twin Towers, and the profound proportions of that tragedy continue to reverberate in New York and beyond. The question of size in the urban scheme remains a complex issue for the future of tall buildings everywhere.

The Visual Index to the Virtual Archive 2 was an interactive interface providing access to The Skyscraper Museum's unique collection of more than 1,000 photographs of the construction of the Empire State Building and the World Trade Center towers. Visitors could explore the building progress for each project and view photographs of the rising structures, workers, machinery, ceremonies, and city scenes. Complete with captions and descriptions of the images, VIVA 2 allowed visitors to discover and compare the building technologies and methods of the Empire State Building in the 1930's and of the World Trade Center towers in the 1960's and the 1970's.

In a talk on his autobiography The Structure of Design, and in clips from several documentary interviews, Leslie E. Robertson describes designing the World Trade Center.

The Structure of Design: An Engineer’s Extraordinary Life in Architecture (2017)

The Lower Manhattan Skyline, with & without the Twin Towers (2018)

On the evening of September 11, 2018, a program paired two noted photographers of New York, Camilo Vergara and Richard Berenholtz, to discuss their decades of documenting the evolving identity of lower Manhattan. Each showed sequences that captured the downtown skyline from the same position over time, paying tribute to the Twin Towers, to what was lost, and to the resilience of the city.

Click on the image to explore the World Trade Center Rebuilding gallery mural.

This site presents a digital version of the World Trade Center Rebuilding section in the Museum's permanent exhibition which addresses both the history of the original Twin Towers and the rebuilding at Ground Zero over the decades after the tragic events of 9/11. This content is displayed as a timeline in the gallery's south wall in a mural 29 feet wide by 11 feet tall wall and is stratified in three thematic zones, as shown in the image above: Timeline, Construction Views, and Master Plans. To access the same content of images and text here, click on the menu tabs to view slideshows.

The interactive World Trade Center slider allows users to compare the Lower Manhattan skyline before and after 9/11. The series of photographs were taken by Richard Berenholtz from the same vantage point in Jersey City from 1999 through 2019. This sequence was a part of the Museum's 2018-19 exhibition SKYLINE which also features historic views spanning the early twentieth century.