The Museum enhances its accessibility and enriches its exhibitions through a variety of virtual projects. The digitization of our collection allows visitors to explore the archive outside of their visit to the gallery. Additionally, the projects all seek to further the core principles of the institution: to explore tall buildings as objects of design, products of technology, sites of construction, investments in real estate, and places of work and residence.

The Skyscraper Museum has just launched a new on-line series of revisionist TOP TEN lists that re-present the tallest towers in line-ups that rethink how buildings are measured and ranked, posing new questions that try go beyond one-dimensional thinking about vertical feet. Each illustrated list includes information on the design and construction, as well as links to archived materials on the Museum’s website. For images or permissions information, please see our Rights and Reproduction Policy. 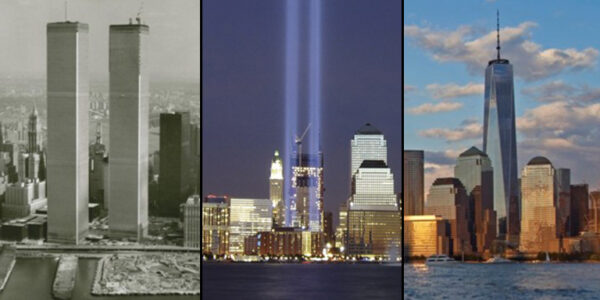 In honor of the twentieth anniversary of 9/11, this landing page brings together various projects, both records of the Museum’s physical exhibitions and online resources and projects, that address the history of the original World Trade Center, their destruction, and the rebuilding at Ground Zero in the decades that followed. 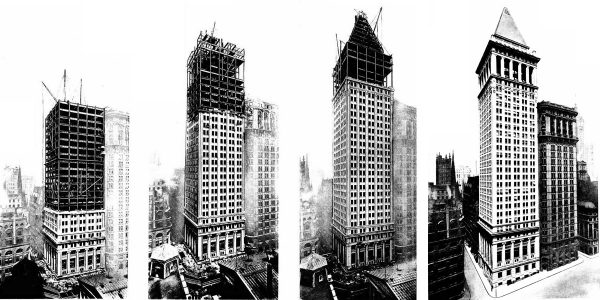 The Virtual Archive is a project to identify, inventory, and create a database of important historical records relating to skyscrapers and their urban milieu. The database for the Bankers Trust Collection is the first phase of the project. It has been made possible by generous funding from the Graham Foundation for Advanced Studies in the Fine Arts. 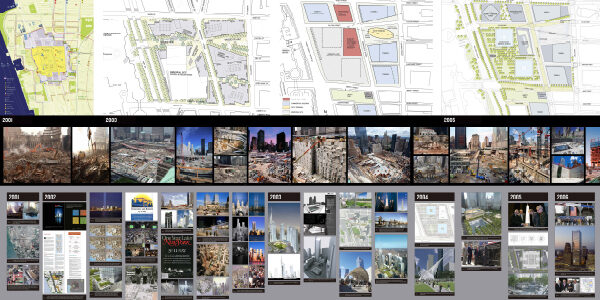 This project is a digital version of the World Trade Center Rebuilding section in the Museum’s permanent exhibition which addresses both the history of the original Twin Towers and the rebuilding at Ground Zero over the decades after the tragic events of 9/11. This content is displayed as a timeline in the gallery’s south wall in a mural 29 feet wide by 11 feet tall wall and is stratified in three thematic zones: Timeline, Construction Views, and Master Plans. 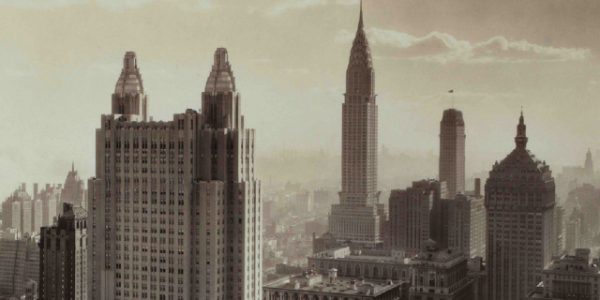 Whether you’re a teacher leading an online class, a parent looking to foster a love of cities, a researcher interested in the archives, or simply curious about NYC, there’s plenty to keep you occupied. Check out our book talk archive, lesson plans (including Tower Tubes!), or virtual exhibitions from the past. 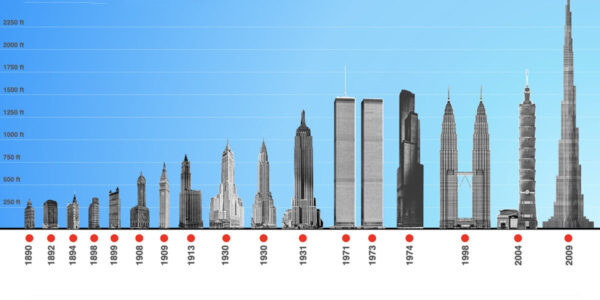 World’s Tallest Towers is an online project showing a timeline of all skyscrapers holding the title of the tallest building in the world from the 1890s to the present. 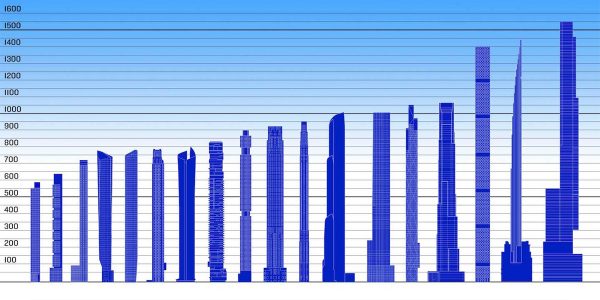 ​A new form in skyscraper history has evolved in New York over the past decade: the super-slim, ultra-luxury residential tower. These pencil-thin periscopes — all 50 to 90+ stories — use a development and design strategy of slenderness to pile their city-regulated maximum square feet of floor area (FAR) as high in the sky as possible to create luxury apartments defined by spectacular views. The basic, yet complex principles of the economics, engineering, and design of this new type of super-slender towers were detailed in the exhibition SKY HIGH & the Logic of Luxury. 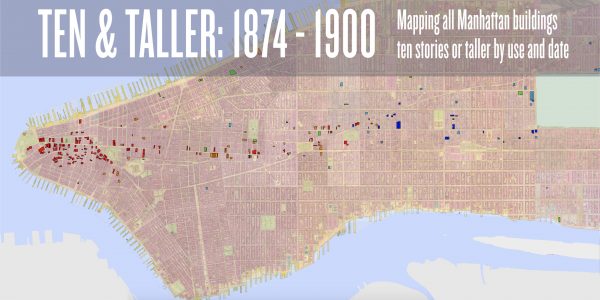 TEN & TALLER illustrates every building erected in Manhattan that was ten stories or taller from 1874 through 1900 – a total of 252 structures – and locates them on a historic land map, as well as on a timeline that also represents their height and use. The exhibition presents an unprecedented way of visualizing the historical development of New York’s commercial architecture. 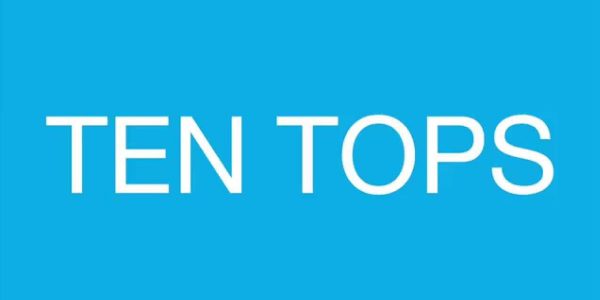 The Skyscraper Museum launched a new online series of revisionist TOP TEN lists that re-present the world’s tallest towers in line-ups that rethink how buildings are measured and ranked, posing new questions that try go beyond one-dimensional thinking about vertical feet. Each illustrated list includes information on the buildings’ design and construction, as well as links to archived materials on the Museum’s website. 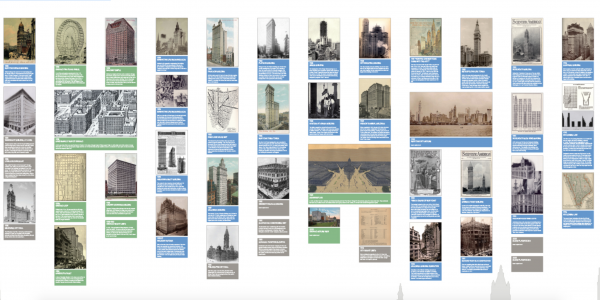 This interactive website presents illustrated episodes in the history of height from the pyramids to the present, highlighting themes and buildings that relate to the evolution of the skyscraper and point the way to 21st-century supertalls. It examines the ambition to build high, the technological advances and engineering innovations that enabled that desire, the economics that drove commercial development, the influence of outstanding architectural designs, and the codes and regulations that shaped buildings and skylines. 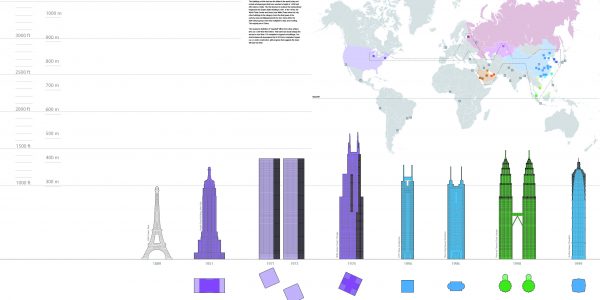 Inspired by the superior height of Burj Khalifa, the Museum measured supertall skyscrapers according to a higher standard than the common 300 meters, as part of its 2007 exhibition World’s Tallest Building: Burj Dubai. Our 380+ meter benchmark was set by the Empire State Building’s 86 occupiable stories and 1,250-foot height to the top of its original 1931 mooring mast. Buildings that matched or exceeded these markers in 2007 were included in this global survey. 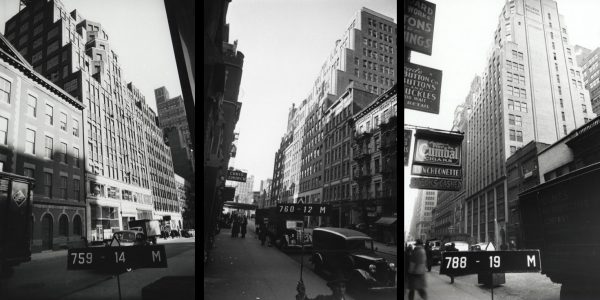 This essay, published online on July 25, 2016, to mark the precise centennial of the passage of the New York City Zoning Resolution on July 25th, 1916, is a revised and updated version of a 1991 conference paper and subsequent chapter of a 1993 book, Planning and Zoning New York City: Yesterday, Today, and Tomorrow. Organized by the New York City Department of City Planning, the conference celebrated the 75th anniversary of the zoning law with a symposium on the history and future of planning in New York City. Read the final report. Read the essay.

Trace the rich history of lower Manhattan on its streets or on your computer. The Skyscraper Museum has updated four walking tours, first created in 1996 as Heritage Trails New York, with modern markers adding two new decades of development. Hunt the original markers on the street and read and see the recent history on your mobile device.

Explore Downtown’s history and read updates from the past two decades from your computer or as you trace the original routes! 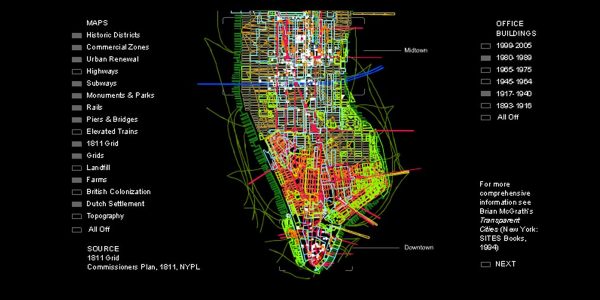 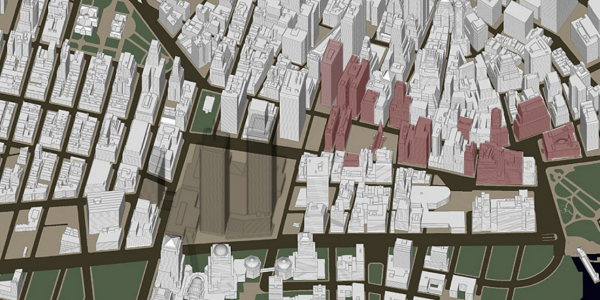 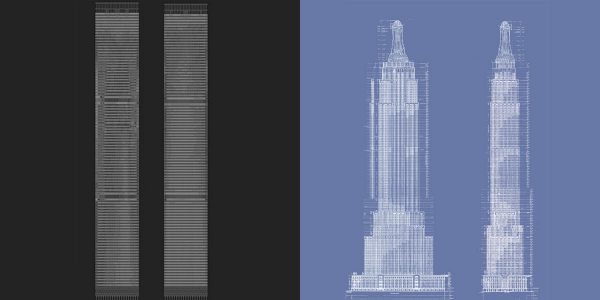 The Visual Index to the Virtual Archive 2 is an interactive interface providing access to The Skyscraper Museum’s unique collection of more than 1,000 photographs of the construction of the Empire State Building and the World Trade Center towers. Visitors can explore the building progress for each project and view photographs of the rising structures, workers, machinery, ceremonies, and city scenes. Complete with captions and descriptions of the images, VIVA 2 allows visitors to discover and compare the building technologies and methods of the Empire State Building in the 1930’s and of the World Trade Center towers in the 1960’s and the 1970’s. 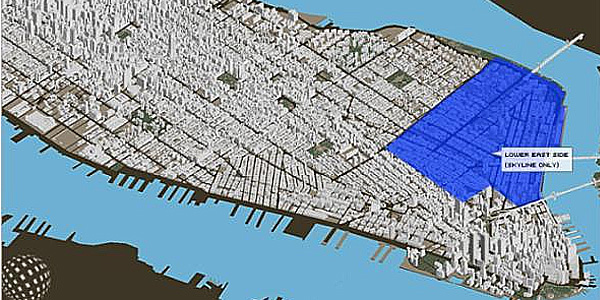 The Visual Index to the Virtual Archives is an innovative visually-based interface that uses a 3-D computer model of Manhattan as a click-on map, allowing visitors to view the city, present and past, and to access the Museum’s collections through an on-line, searchable database. The idea of a visual index to the collection recognizes the importance of graphic representation in both the medium of the website and in the way that visitors, virtual or actual, come to understand and comprehend a city through its geography and landmarks. An index to the Museum’s archives based on the image of the city allows web visitors or researchers to explore specific buildings or districts and their histories without, necessarily, coming to the site with a specific topic or question in mind.