William G. Tung is the Managing Director of the Rockefeller Group and has directed each of its activities in Asia Pacific since 2003, including branded mixed-use developments in China. Mr. Tung heads the master development of the historic Waitanyuan project on the Bund in Shanghai, a 39 1/2 acre mixed-use development on the banks of the Huangpu and Suzhou Rivers. The project is slated by Shanghai’s municipal government as a centerpiece to help celebrate the 2010 EXPO in Shanghai. The master development company is a joint venture between The Rockefeller Group/Sinolink and New Huangpu Group, a privatized government company in Shanghai that was designated by the People’s Republic of China to participate in the project. Before joining The Rockefeller Group, Mr. Tung was a Vice President with Bertelsmann, the global media conglomerate, directing all its corporate real estate activities and ownership interests for 10 years. Prior to Bertelsmann, Mr. Tung was an Executive Vice President and Partner with Broadway State Partners, a major property development company in the New York region, involved in all aspects of property development and valued at over US $2 billion. Earlier in his career, Mr. Tung practiced as a licensed architect with Skidmore, Owings & Merrill and managed projects worldwide. 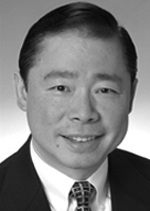