American-trained architect Benjamin Wood’s first commission in China was Xintiandi, a cultural entertainment district in Shanghai. His most significant contribution on a major project outside of China was as the Chief Architect of New Soldier Field in Chicago, home of the Chicago Bears. Completed in September of 2003, this 64,000-seat stadium was built in a record 19 months. This project was co-designed with his former partner Carlos Zapata, among the Bethesda Academy for the Performing Arts, the Publix Store in Miami, Beach, and the Chicago Bears Football Club Practice Facility. After graduating from Massachusetts Institute of Technology, Mr. Wood was a Partner and Design Director at Ben Thompson’s office in Cambridge, Massachusetts, leading teams for the redevelopment of Spitalfields Market, City of London (3 million sq. ft.) and the Minato Murai complex, a 3.5 million sq. ft. mixed-use project in Yokohoma Japan (in association with Nikken Seikkei). In the 90s, first as a principal of Thompson and Wood, then later with Wood and Zapata, Mr. Wood authored master plans for the Revitalization of New York’s Times Square (1993), Lincoln Road and the Art Deco District in Miami Beach (1992), Playhouse Square in Cleveland Ohio (ULI Award of Excellence), and developed growth management strategies for the Rocky Mountain resort towns of Snowmass, Aspen, and Telluride Colorado and for Park City Utah. 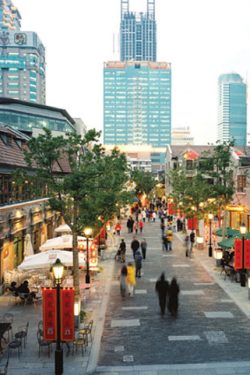