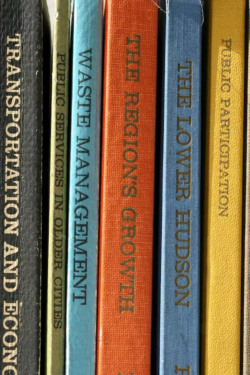 The centennial of the RPA – the Regional Plan Association – was celebrated last October with a stunning exhibition in Grand Central Terminal's Vanderbilt Hall and recognized in a session at the national conference of the Society of City and Regional Planning History (SACRPH). On January 31st at 6pm, The Skyscraper Museum will continue the discussion with a live panel – but online audience – that brings together the President of the RPA, Tom Wright, the designer and producer of the centennial exhibition "The Constant Future: A Century of the Regional Plan," James Sanders, FAIA, and urban and planning historian Robert Fishman, whose SACRPH conference paper, "How Planners Saved New York: The RPA's Second Regional Plan (1950-1970) and the Survival of Transit," has inspired our program. A video of Bob's illustrated talk will be shown at 5:30pm, 30 minutes before the live program. The video can be viewed anytime on the Museum's YouTube channel here. Also joining in the panel will be Lynne Sagalyn, Professor Emerita at the Columbia Business School, and Carol Willis, Director of The Skyscraper Museum.

As Bob Fishman observes in his talk, the reputation and credibility of planners have suffered badly in the past decades, both in professional circles and in popular culture, where Robert Moses is a chief villain of stage and screen. The question he asks – "What role, if any, did regional planning play in maintaining New York's global ascendancy over the last century (1922-2022)?" – has a more positive outlook in both the exhibition "The Constant Future," and in Bob's lecture. Our live-panel program will explore some answers and open the floor for audience Q & A.

ROBERT FISHMAN recently retired from full-time teaching as a professor of architecture and urban planning at the University of Michigan’s Taubman College of Architecture and Urban Planning. An internationally recognized expert in the areas of urban history and urban policy and planning, he has authored several books that are regarded as seminal texts on the history of cities and urbanism.

LYNNE SAGALYN is the Earle W. Kazis and Benjamin Shore Professor Emerita of Real Estate at Columbia University’s School of Business, where she taught for more than twenty years and built its MBA Real Estate Program. She serves on the Board of Directors of the Regional Plan Association and The Skyscraper Museum.

JAMES SANDERS, FAIA, is an architect, author, and filmmaker who was designer and producer of the RPA centennial exhibition. In 2021, with Ric Burns, he published the new, expanded edition of New York: An Illustrated History, which updated the classic 1999 edition of the book that was the companion volume to the acclaimed 17 ½-hour PBS series "New York: A Documentary Film," directed by Ric Burns and co-written by Burns and Sanders.

CAROL WILLIS is the founder and director of The Skyscraper Museum.