The Roots of Urban Renaissance:
Gentrification and the Struggle over Harlem 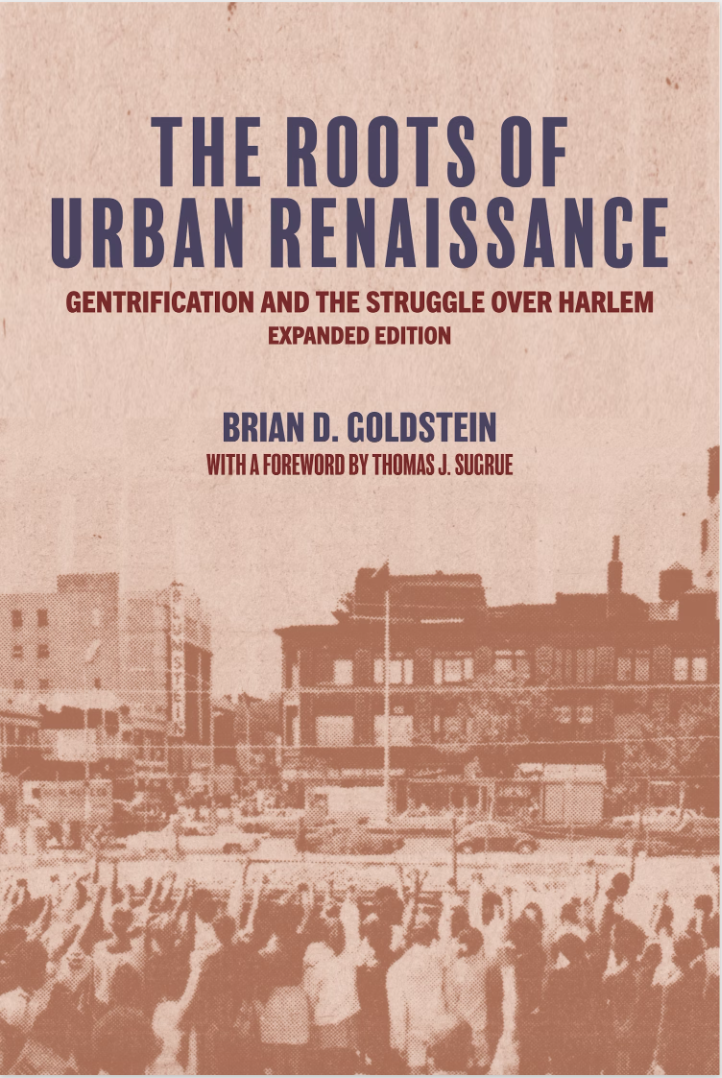 With its gleaming shopping centers and refurbished row houses, today’s Harlem bears little resemblance to the neighborhood of the midcentury urban crisis. In The Roots of Urban Renaissance: Gentrification and the Struggle over Harlem, first published in 2017 by Harvard University Press, Brian D. Goldstein traces Harlem’s Second Renaissance to a surprising source: the radical social movements of the 1960s that resisted city officials and fought to give Harlemites control of their own destiny. Inspired by the civil rights movement, young activists envisioned a Harlem built by and for its low-income, predominantly African American population. In the succeeding decades, however, the community-based organizations they founded came to pursue a very different goal: a neighborhood with national retailers and increasingly affluent residents.
Now re-released in an expanded edition by Princeton University Press (2023), The Roots of Urban Renaissance resonates with a new context of social and political issues. Goldstein will discuss his thesis that gentrification was not imposed on an unwitting community by unscrupulous developers or opportunistic outsiders, but rather grew from the neighborhood’s grassroots, producing a legacy that benefited some longtime residents and threatened others. His illustrated talk will focus on a single block on 125th Street that now contains the State Office Building, but which was imagined and reimagined many times over the course of the book's history.
Goldstein will be joined in discussion by Richard Eaddy, a long-time Commissioner on the NYC Planning Commission and a former executive director/CEO of Harlem CDC.

Brian D. Goldstein is an architectural and urban historian and an associate professor at Swarthmore College. His research focuses on the intersection of the built environment, race and class, and social movements, especially in the United States. He is currently working on a new book, If Architecture Were for People: The Life and Work of J. Max Bond, Jr., under contract with Princeton University Press.

Richard Eaddy is an Executive Managing Director at Savills, New York. He recently stepped down from his seat on the NYC Planning Commission, where he served since 2002. Eaddy has more than 25 years of experience in real estate development and consulting, including holding state and city-appointed government offices and serving as executive director/CEO of Harlem CDC and deputy borough president of the Bronx. He has held numerous positions in the private and nonprofit sectors, managing commercial projects and initiatives throughout New York City.