The Fulton Fish Market:
A History 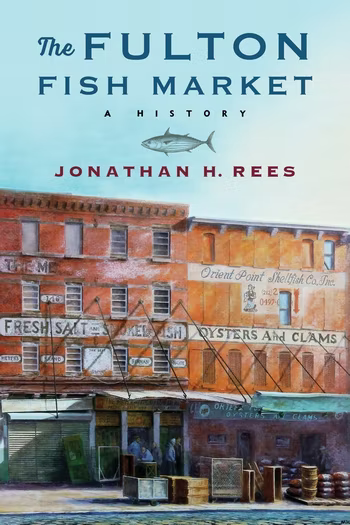 Today, the once bustling, fragrant fish market in lower Manhattan's South Street Seaport is a rebuilt retail destination with a new kind of marketing –  but from its founding in 1822, through its move to the Bronx in 2005, the Fulton Fish Market was an iconic New York institution. At first a neighborhood market for many different kinds of food, by the late nineteenth century, it became the nation’s largest fish and seafood wholesaling center. Thousands of immigrants worked at the Fulton Fish Market and introduced the rest of the city to their seafood traditions. In popular culture, the market evoked images of the animated East River waterfront, late-night fishmongering, organized crime, and a vanished working-class New York.
In his new book The Fulton Fish Market: A History (Columbia University Press, 2022), historian JONATHAN H. REES examines the market’s workings and significance, tracing the transportation, retailing, and consumption of fish. Rees tells the stories of the people and institutions  – including fishermen, retail stores, restaurants, and chefs – bringing together technological, culinary, and environmental history to explain how changes in the urban landscape and economy affected the history of the market and the surrounding neighborhood.
Jonathan H. Rees
JONATHAN H. REES is a professor of history at Colorado State University–Pueblo. His books include Refrigeration Nation: A History of Ice, Appliances, and Enterprise in America (2013) and Before the Refrigerator: How We Used to Get Ice (2018).
Skip back to main navigation
×