South Bronx Rising:
The Rise, Fall, and Resurrection of an American City 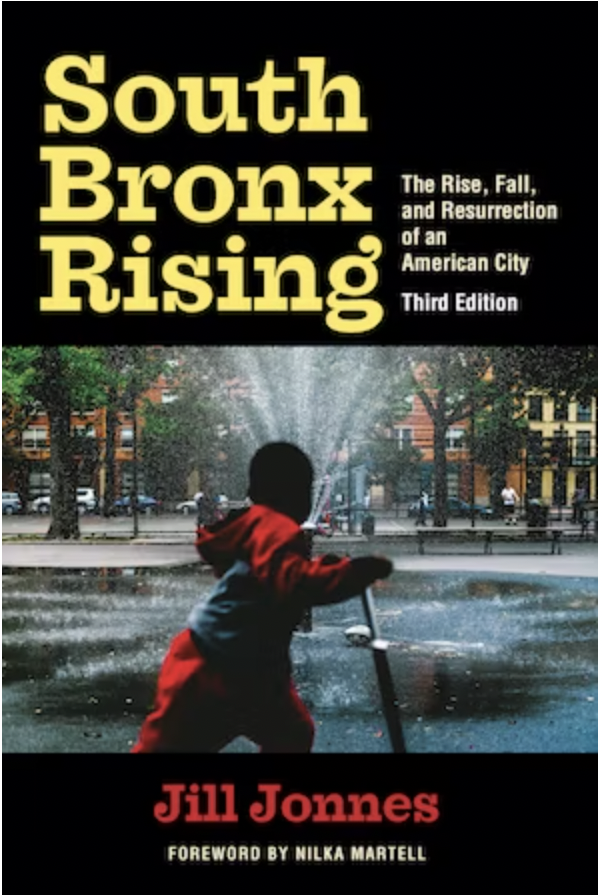 Thirty-five years after this landmark of urban history – originally titled We're Still Here in a 1986 first edition – Jill Jonnes continues to chronicle the rise, fall, rebirth, and ongoing revival of the South Bronx. The once-thriving New York City borough, ravaged in the 1970s and ’80s by disinvestment and fires, then heroically revived and rebuilt in the 1990s by community activists, has been Jonnes's subject in three editions, expanding the first South Bronx Rising (2000) in 2022. Though now globally renowned as the birthplace of hip-hop, the South Bronx remains America’s poorest urban congressional district. In this new edition, Jonnes describes the present generation of activists who are transforming their communities with the arts and greening, notably the restoration of the Bronx River. For better or worse, real estate investors have noticed, setting off new gentrification struggles.

Jonnes will be joined in the presentation by Nilka Martell, a parks advocate, writer, and the founder of Loving The Bronx, who also wrote the introduction to the 2022 edition of South Bronx Rising. After their talk, Jonnes and Martell will be joined in discussion by Nicholas Dagen Bloom, professor of urban policy and planning, and director of the Master of Urban Planning Program, at Hunter College.

Jill Jonnes is the author of several books that explore the impact of new technologies, structures, and landscapes on modern cities and society, including Empires of Light: Edison, Tesla, Westinghouse, and the Race to Electrify the World and Conquering Gotham: Building Penn Station and Its Tunnels. In 2016 she published Urban Forests: A Natural History of Trees and People in the American Cityscape. Jonnes holds an M.S. from Columbia Journalism School and a Ph.D. in American History from Johns Hopkins University.

Nilka Martell is an activist in the Bronx and the Founder & Director of Getting Involved, Virginia Avenue Efforts (G.I.V.E.) and Loving the Bronx. She organizes clean-ups, tree plantings, and activities for youths throughout the Bronx. Martell is the President of the Friends of Pelham Bay Park and serves as the Chair of the Bronx River Alliance.

Nicholas Dagen Bloom is a professor of urban policy and planning, and director of the Master of Urban Planning Program, at Hunter College. He is the author or editor of numerous books about urban development, including Public Housing That Worked: New York in the Twentieth Century and How States Shaped Postwar America: State Government and Urban Power (2019). He will discuss his new book The Great American Transit Disaster: A Century of Austerity, Auto-Centric Planning, and White Flight in a Museum program on May 16.