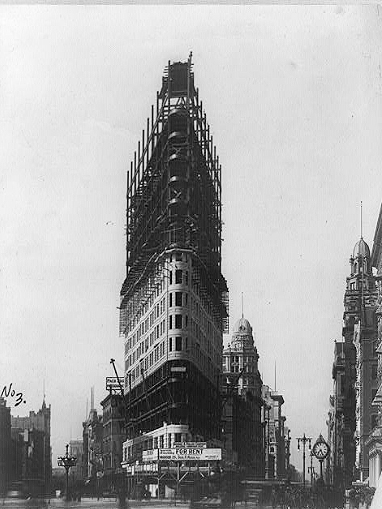 The sixth session of the 2022 Construction History lecture series Work in Progress brought together the key presenters and the additional speakers for a virtual roundtable review and discussion of what we had learned from the talks and what framing questions should be applied in future research and scholarship.

Our principal speakers for the first four sessions, DONALD FRIEDMAN and THOMAS LESLIE, described the separate building cultures in New York and Chicago with respect to Foundations, Frames, Facades, and Fire as contingent on their particular sites and responsive to local conditions of soil, building codes, and easily available and economical building materials. ALEXANDER WOOD added the social and urban dimensions of the developer, architect, and builder, as well as the geography of the production of building materials, to his case study of the 1882 Mills Building. They, along with the session commentators JOANNA MERWOOD-SALISBURY, BRIAN BOWEN, JARED M. GREEN, and CAROL WILLIS discussed whether there were, in fact, any commonalities in early skyscraper construction in the two cities of its invention.

This session also revisited one of the premises of the semester, which was to challenge both the persistent narratives of “the first skyscraper” in popular culture and the modernist mindset that has focused on the steel skeleton as the definition of the building type. We discussed how “the history of history” had shaped our understanding of the processes of change and how broader perspectives might succeed in capturing the spotlight of the public imagination and discourse.

The video begins with a brief introduction by Museum Director Carol Willis, followed by individual presentations by Joanna Merwood-Salisbury, Donald Friedman and Thomas Leslie, then a dialogue with all participants.

ALEXANDER WOOD is the Helen and Robert Appel Fellow in History and Technology at the New-York Historical Society. An architectural and urban historian, he is writing a social and economic history of the New York building industry from the 1880s to the 1930s. He received his Ph.D. from Columbia University and his B.Arch. from the Cooper Union.

JOANNA MERWOOD-SALISBURY will be a respondent to the talks. She is a Professor of Architecture at Victoria University of Wellington, New Zealand. Her research on 19th-century American architecture and urbanism has a particular emphasis on issues of race and labor. Her publications include Design for the Crowd: Patriotism and Protest in Union Square (University of Chicago Press, 2019) and Chicago 1890: The Skyscraper and the Modern City (University of Chicago Press, 2009).

BRIAN BOWEN will be the respondent. He is the author of The American Construction Industry: Its Historical Evolution and Potential Future (Routledge, 2021). In 2000, Bowen retired as president of Hanscomb Inc., after a long career in the construction industries of England, Canada, and the United States and in 2008 he helped establish the Construction History Society of America, a branch of the CHS based in the United Kingdom and serves as its chairman emeritus.

JARED M. GREEN will be the respondent to the talks. Green is a licensed professional geotechnical engineer in the Philadelphia office of LANGAN. He has nearly 20 years of experience working throughout the New York Metropolitan Area, Upstate New York, New Jersey, and Eastern Pennsylvania, leading multidisciplinary projects that include developing creative design solutions for performing excavation alongside historic structures and sensitive below-grade transit tunnels.

CAROL WILLIS is the founder and director of the Skyscraper Museum and a professor of Urban Studies at Columbia University’s Graduate School of Architecture, Preservation and Planning. She is also the author of Form Follows Finance and co-author of Building the Empire State with Donald Friedman.