Buried Beneath the City:
An Archaeological History of New York 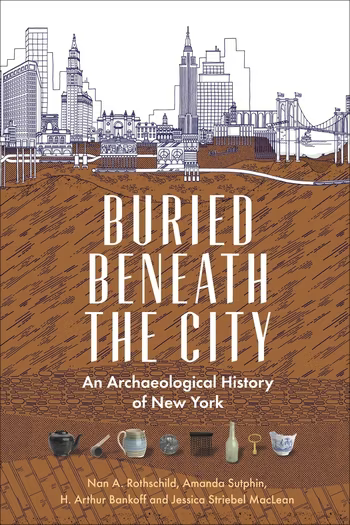 Bits and pieces of the lives led long before the age of skyscrapers are scattered throughout New York City, found in backyards, construction sites, street beds, and parks. Indigenous tools used thousands of years ago; wine jugs from a seventeenth-century tavern; a teapot from Seneca Village, the nineteenth-century Black settlement displaced by Central Park; raspberry seeds sown in backyard Brooklyn gardens—these everyday objects are windows into the city’s forgotten history.

Buried Beneath the City uses urban archaeology to retell the history of New York, from the deeper layers of the past to the topsoil of recent events. The book demonstrates how the archaeological record often goes beyond written history by preserving mundane things—details of everyday life that are beneath the notice of the documentary record. These artifacts reveal the density, diversity, and creativity of a city perpetually tearing up its foundations to rebuild itself. Buried Beneath the City is at once an archaeological history of New York City and an introduction to urban archaeology.

NAN A. ROTHSCHILD is an urban social archaeologist who was Ann Whitney Olin Professor of Anthropology at Barnard College and is adjunct professor at Columbia University.

AMANDA SUTPHIN is the director of archaeology at the New York City Landmarks Preservation Commission and manages the NYC Archaeological Repository: The Nan A. Rothschild Research Center.

The video begins with an introduction of the authors by Carol Willis, followed by an illustrated talk by Nan A. Rothschild and Amanda Sutphin, and followed by a brief dialogue with Carol Willis.