At a festive party in its lower Manhattan gallery on June 16, The Skyscraper Museum presented the 2009 Making New York History Award to the Battery Park City Authority, citing the Authority's four decades of legacy and leadership in creating a new downtown community that has enhanced the New York skyline and created an unexcelled amenity of parks and public space. Chairman James F. Gill and President James E. Cavanaugh accepted the award for the BPCA. More than 150 guests, including many of the past presidents and chairman, architects, planners, and developers of the 92-acre community, joined in the salute. 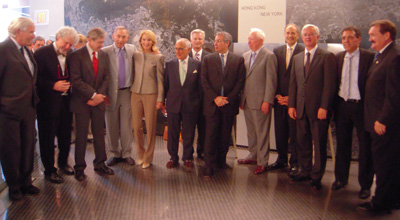 Museum Director Carol Willis welcomed the assembled guests and introduced a series of distinguished speakers who reminisced about their work with the Battery Park City Authority.

Amanda M. Burden, Chair of the New York City Planning Commission and Director of the Department of City Planning, spoke of her own experiences as a young urban designer, working in 1983 on the then sand pile of Battery Park City. She described how radical and progressive the plan of Battery Park City was at the time and recalled the dedication to design values in all facets, especially attention to texture, material, and detail. 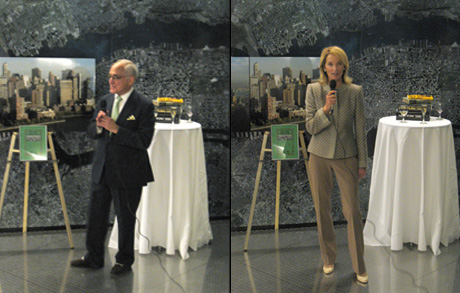 Architect and Dean of the Yale School of Architecture, Robert A.M. Stern also toasted the original achievements and continuing evolution of Battery Park City, citing, in particular, the master plan and urban design guidelines of developed by the planners Alexander Cooper and Stan Eckstut, who now practice separately but were both present to receive the kudos. Bob Stern, who designed Tribeca Green in BPC, also noted how the plan continues to thrive as part of New York City.

Representing the developers' perspective were Russell Albanese of The Albanese Organization and Phillip Aarons of Millennium Partners, who developed The Ritz-Carlton Hotel and Residences, home to The Skyscraper Museum, and Millennium Tower Residences. Mr. Albanese, whose company built BPC's first LEED-rated residential towers the Solaire and Verdisian and has just completed the Visionaire, cited the Authority's pioneering role in green building design and construction and praised their commitment to educating developers in that model and practice. Phil Aarons spoke of the Authority's skill in achieving a balance between public and private sectors, as well as in appreciating the value of quality architecture and of parks and public art to a community. 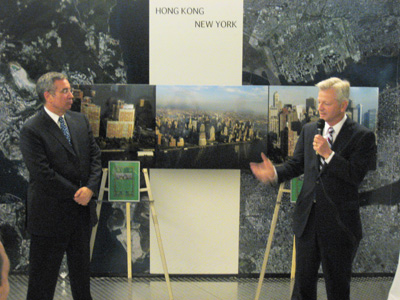 In addition, on behalf of Governor Paterson, a letter of commendation was read by his New York City area representative Sandra Hawkins citing the historic significance of the transformation of lower Manhattan through the work of the Authority. 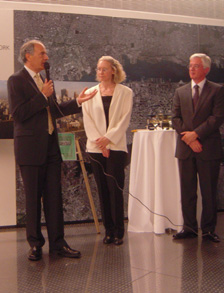 Carol Willis then presented the awards to Chairman James F. Gill and President James E. Cavanaugh. Both expressed immense delight and gratitude for the heartfelt tribute of so many colleagues and spoke of the hard work of staff over the decades. Jed Marcus, Chairman of The Skyscraper Museum Board of Directors, summed up the history as a "remarkable vision."

The ceremony concluded with a group portrait of the evening's speakers and past Presidents and Chairman of the Battery Park City Authority. 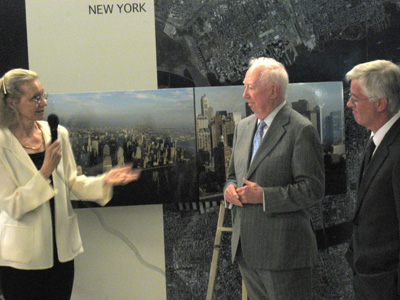 The Battery Park City Authority is the seventh recipient of the award, which The Skyscraper Museum established in 1999 to honor outstanding individuals who have shaped the city's skyline in three dimensions or in public perceptions.

The Hugh L. Carey Battery Park City Authority is a New York State public benefit corporation whose mission is to plan, create, co-ordinate and maintain a balanced community of commercial, residential, retail, and park space within its designated 92-acre site on the lower west side of Manhattan. The Authority is founded on the core values of public and private partnerships, balance and aesthetics, environmental authority, and public benefit. 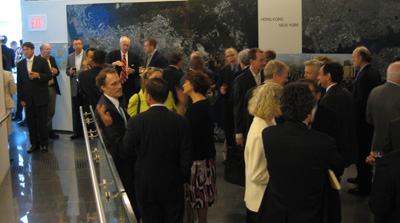