The first chapters in New York’s high-rise history were written in the 1870s through the early 1900s when the city’s great newspapers –the Times, Tribune, and World, among others– erected tall towers as signature headquarters. “Newspaper Row” on the east side of City Hall Park was center stage for their architectural competition and a concentrated hub of production, transforming news into newspapers. These early skyscrapers were both ostentatious advertisements of the papers’ self-proclaimed supremacy and vertical factories where on high floors, editors approved stories and compositors set type, while in the cellar and basement, steam engines or dynamos powered thundering presses that night and day rolled out tens of thousands of papers per hour. 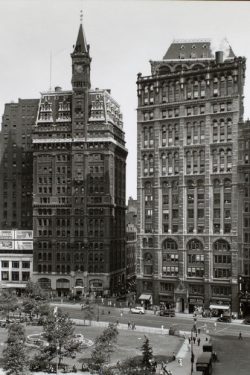