Only one structure in world history – the Eiffel Tower – had achieved the height of 1,000 feet/ 300 meters before 1929, when the Chrysler Building reached its spire to 1,046 feet and 1930 when the Empire State stretched to 1,250 ft., our determinant of supertall.

At the 1889 Paris Exposition Universelle engineer Gustave Eiffel constructed the then-controversial, but now beloved wrought-iron tower as an income-producing tourist attraction and a demonstration of France’s technological progress. At 300 meters it was almost twice the height of the tallest structures of any era – the ancient Egyptian pyramids, the tallest cathedral spire of Europe, or the tallest in the world in 1884, the 555-foot tall Washington Monument – all of which were built of masonry.

The history of building height is most often told as a story about the competition for the world’s tallest structure. The title was taken from France by American skyscrapers in the mid-twentieth century, then by Malaysia, Taiwan, and Dubai in the United Arab Emirates, where it still resides in the 828 meter Burj Khalifa, an extraordinary structure more than two Empire State Buildings tall.

The exhibition SUPERTALL! 2020 does not emphasize the issue of “tallest,” and especially not in the sense of judging parts of the building to count or how different measures reorder the ranking of structures. That is the province of the Council on Tall Buildings and Urban Habitat (CTBUH), which maintains an exemplary online database in their Skyscraper Center (link) and vets the various official measurements of vertical height and lists of the world’s tallest buildings.

Track the History of the Museum's past Supertall exhibitions here. 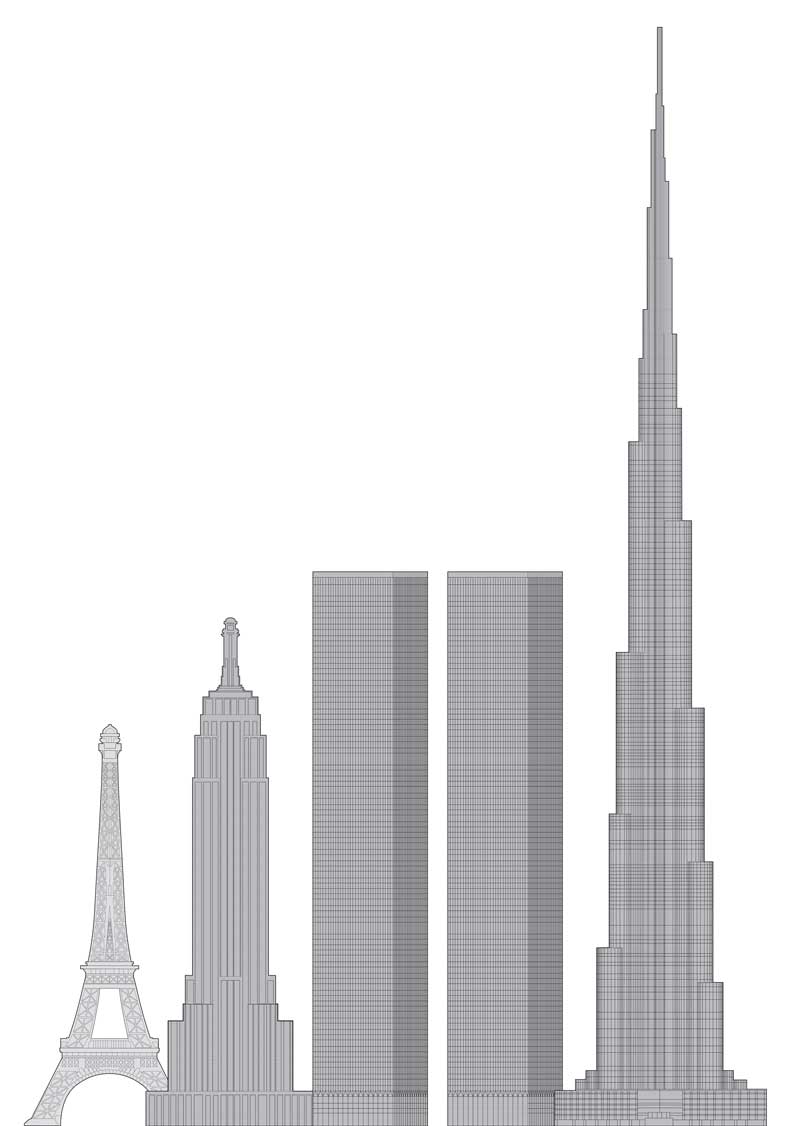 The three different definitions that the CTBUH applies to measure and rank buildings by height, as shown in the adjacent charts, are:

Comparing the charts, we can see that eight buildings remain the same across all three lineups and that the only switches in the list (both in the #10 position) are Taipei 101 for lineup 1 and Sears/ Willis Tower for lineup 2. The most notable misfit on these two charts is One World Trade Center, which stands in the sixth position for the world’s tallest building on both only by virtue of its more than 400-foot spire. One World Trade Center does not make it onto the “Highest Occupied Floor” list at all, nor do Taipei 101 or Sears/ Willis Tower.

Two towers – Shanghai World Financial Center and Two International Finance Centre in Hong Kong – appear only on the “Highest Occupied Floor” list.  Both are substantial buildings in height and girth, so they seem to be much more similar to the others on this chart than the outliers on the other lists.

Supertalls were rare in the 20th century. Although many were proposed, the only ones constructed by 1974 were the American four: the Empire State, the Twin Towers of the World Trade Center, and Chicago’s Sears Tower.

The first international supertalls were the office buildings erected in the booming cities of southern China's Pearl River Delta: Shun Hing Square in Shenzhen and CITIC Plaza in Guangzhou, both completed in 1996. The world took more notice, however, when in 1998 the twin Petronas Towers in the Malaysian capital of Kuala Lumpur took the title of "world's tallest building" away from the United States for the first time. The last of the 20th century's giants was  Jin Mao Tower in Shanghai, which in its slender form, mixed-use program of offices and hotel, and concrete structure prefigured the typical 21st-century supertall.

All the 20th-century Supertalls
Skip back to main navigation