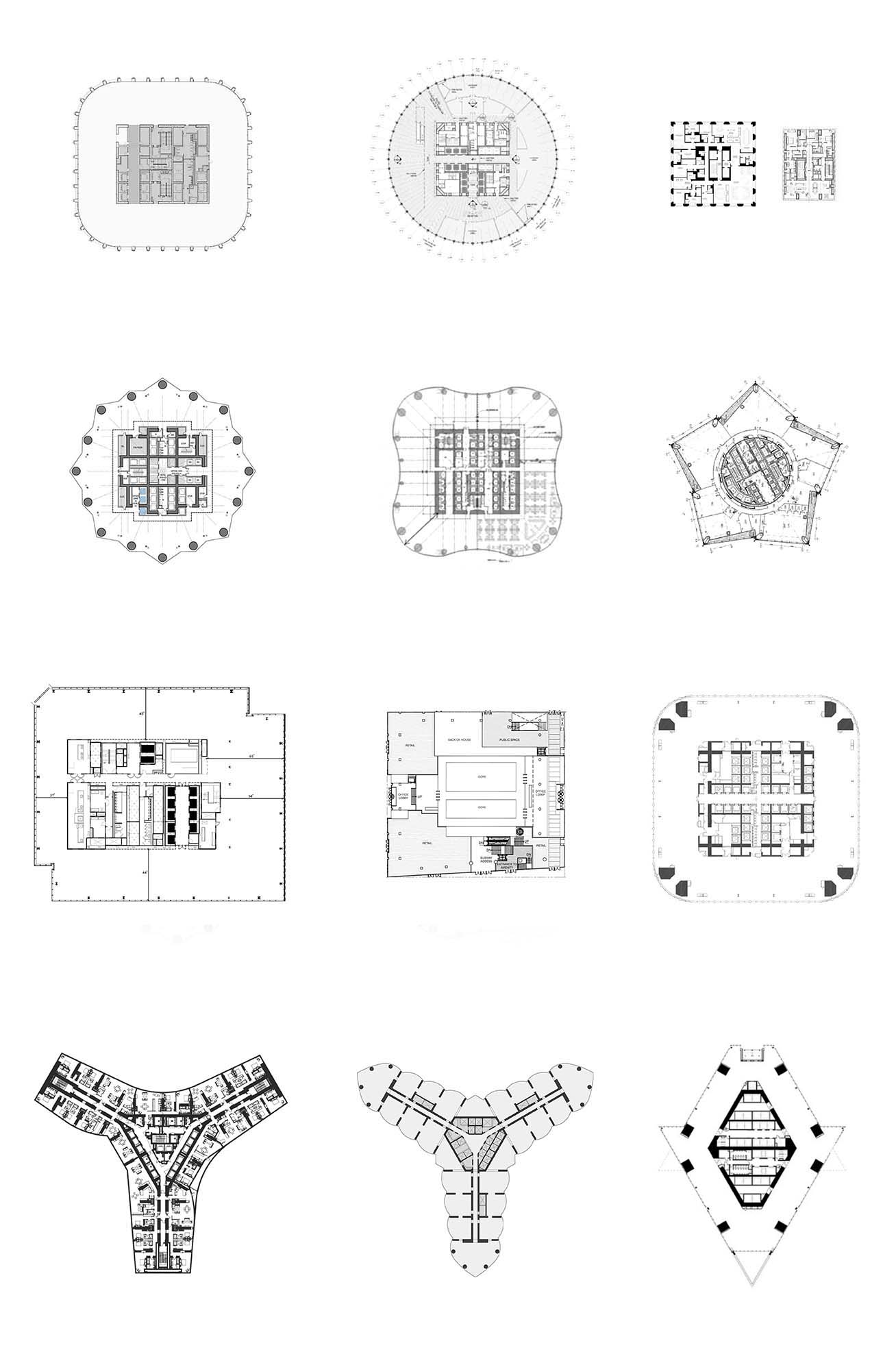 What determines the shape of a building? The architect’s creative idea is key, of course, but also the program – the space requirements and arrangement for the building’s uses. The needs of the program can be seen in the floor plan.

The floor plans here are all shown to the same scale. Some are big: they are the office building plans. Some are very tiny, just a quarter or less of the average office floors: they are luxury apartments.

The clearest way to tell the function of the building by its plan is to look at the core, the area at the center defined by thick walls that is packed with many small rooms, which are the elevators, staircases, bathrooms, and mechanical and service areas. How big is the core? What percent of the full floor plate does it occupy?

Office buildings have large cores principally because they must contain many elevators for vertical transit and machinery to serve large numbers of workers.

By contrast, an ultra-luxury apartment tower in Manhattan may have as few as two to five elevators serving a building of 80 or more stories. That tiny number is sufficient, though, to serve the limited traffic for only one or two apartments per floor.

Some residential structures do have a very large footprint – for example, the Burj Khalifa and Jeddah Tower. Their extraordinary height requires a wide footprint with three widely spaced wings to buttress the central core. At 828 meters, Burj is twice the height of New Yorks’ 432 Park Avenue of 111 W. 57 Street

No matter the dimensions of the floor plate, the area devoted to the core in supertalls is substantial because the internal space is needed to accommodate service areas and also because the stiff, heavy, reinforced concrete core is central to the stability of the structure.

The plans of the towers featured in the exhibition include squares, circles, stars, triangles/ diamonds, and Y-shaped, or slight variations of those forms. The spectrum of shapes suggests the variety and invention that can be found in recent supertall designs.

The plans also reveal a range of structural systems that can be applied to the challenge of exceptional height. The relation of the core and the columns is one place to observe different approaches. Many columns spaced closely together on the perimeter of the building indicates “tube” construction, as is used in China Resources Tower, Guiyang World Trade Center, and 432 Park Avenue – although those buildings look dramatically different in elevation.

Just a few large columns indicate a mega-column system –such as seen in the plan of CITIC Beijing. No columns at all, just walls, as in the plans for Burj Khalifa and Jeddah Tower, show a bearing-wall system. Structural systems are further examined in the ENGINEERING section of the menu.

The plans shown here represent typical floors, but in most cases, they show only a “slice” through the building that changes form dramatically above. In the twentieth century, most skyscrapers were constructed of steel, with columns and beams bolted in a grid, and postwar Modernism favored an aesthetics expression of the steel frame  and “glass box.” Twenty-first-century towers explore a wide range of formal expression, while floor-to-ceiling curtain walls has become the near-universal façade treatment.

This formal invention has been made possible by computers and concrete. Designing and generating floor plans digitally, rather than by drawing each floor in pencil and reproducing as blueprints, eliminates the advantage of simple replication, story on story.

Computers allow for each floor plan to be different than the one above, so that sloping, twisting, and curving all become possible. Shifting shapes, especially tapering in the upper sections also accommodates a mixed-use program that places hotels­ – which require only a shallow ring of floor space – on the upper stories.

Building in concrete also allows for more “fluidity” of form and simplicity of construction since there is no fabrication of a jigsaw of numbered steel members off-site. Concrete is generally less expensive than steel. 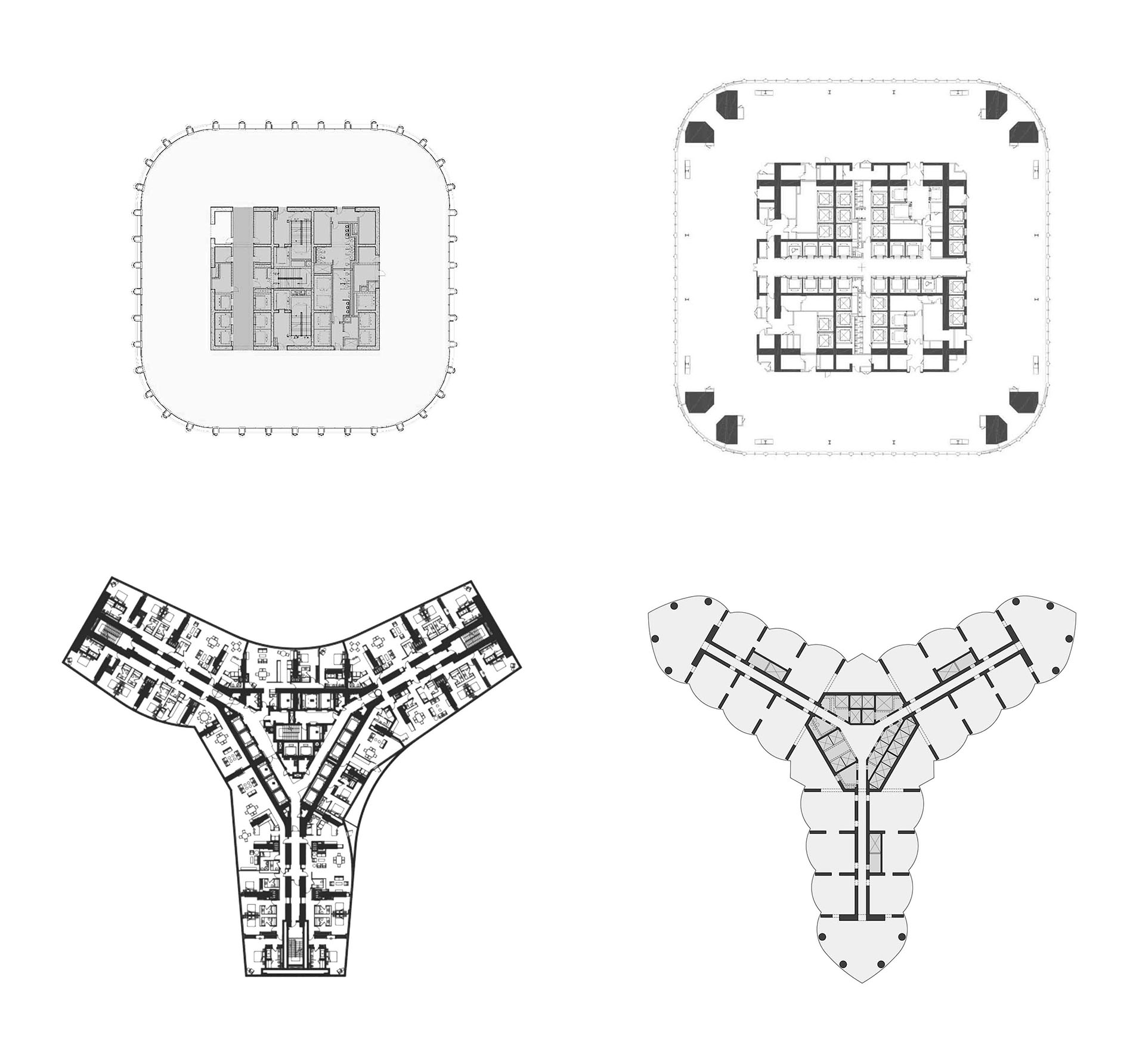 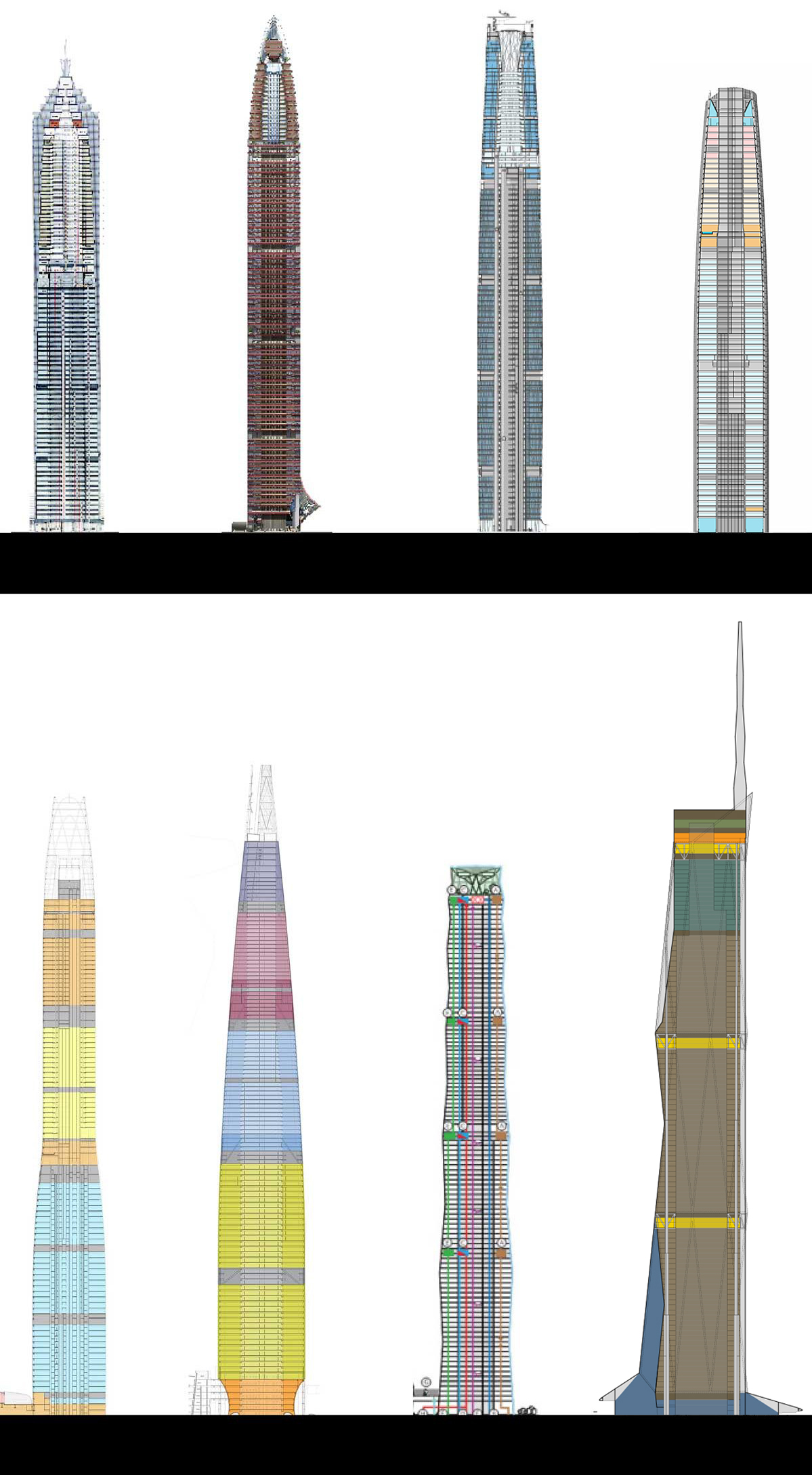 The great majority of supertalls worldwide are mixed-use projects, generally combining offices on the lower floors and serviced apartments and/or a hotel on the upper zone. Public functions of restaurants, bars, or observation decks often occupy the top stories. Some of the sections shown here are color-coded to distinguish changes in program.

Office floors usually represent half or more of the lower stories where deep floor plates can accommodate large numbers of employees and office equipment. Middle zones may contain apartments, serviced by the hotel above. Since the design of hotel rooms value large windows and stunning views, smaller floor plates are desirable. Often the center of the tower is pierced by an open atrium – a dramatic void that can be experienced from the above and below, but also from the open-access corridor to the perimeter of hotel rooms. These shallow floor plates allow mixed-use supertalls to narrow towards the top either in setbacks or in a sculpted form that can give the tower a distinctive profile.

Supertalls almost always anchor a much larger development that includes multiple towers and retail structures, or even a district master plan, all under the coordinated control and strategy of a large real estate company that often represents government interests or investments. The economics of the towers, which are more expensive to build than several shorter towers with the same amount of space, rely on the prestige and added value the signature supertall gives to the larger project.