Cities with multiple supertalls are rare, so their conditions and context seem to matter. In 2020, the cities with the greatest number of supertalls are New York with seven; Dubai with five; the Chinese cities of the Pearl River Delta, Shenzhen, with five, and Guangzhou with three; and both Shanghai and Wuhan with three. The Malaysian capital Kuala Lumpur also has three, counting the twin Petronas Towers as one project. 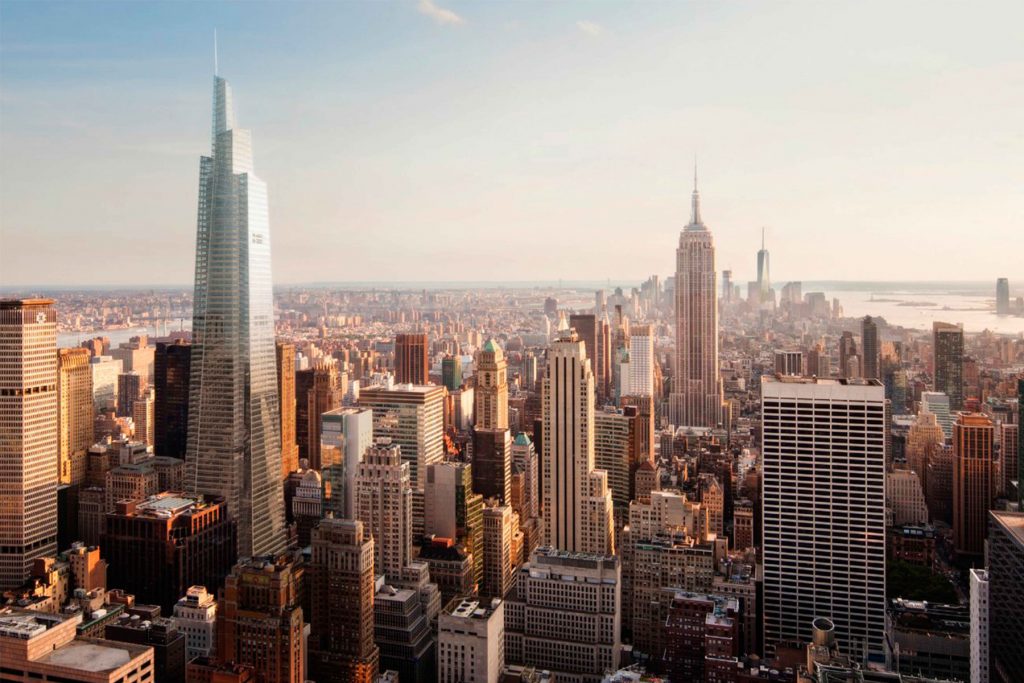 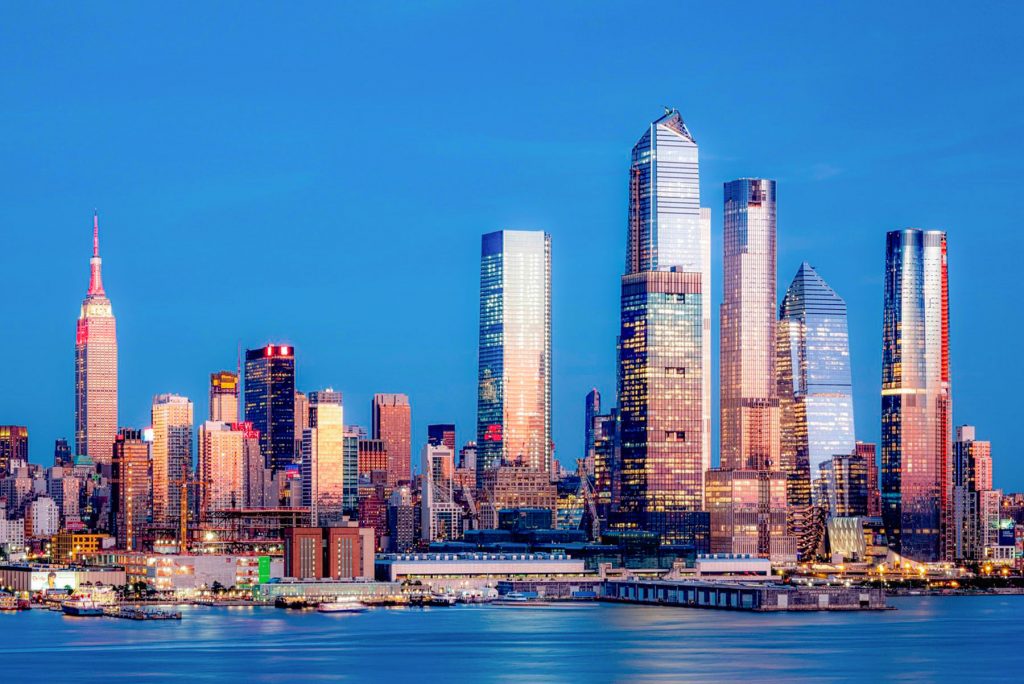 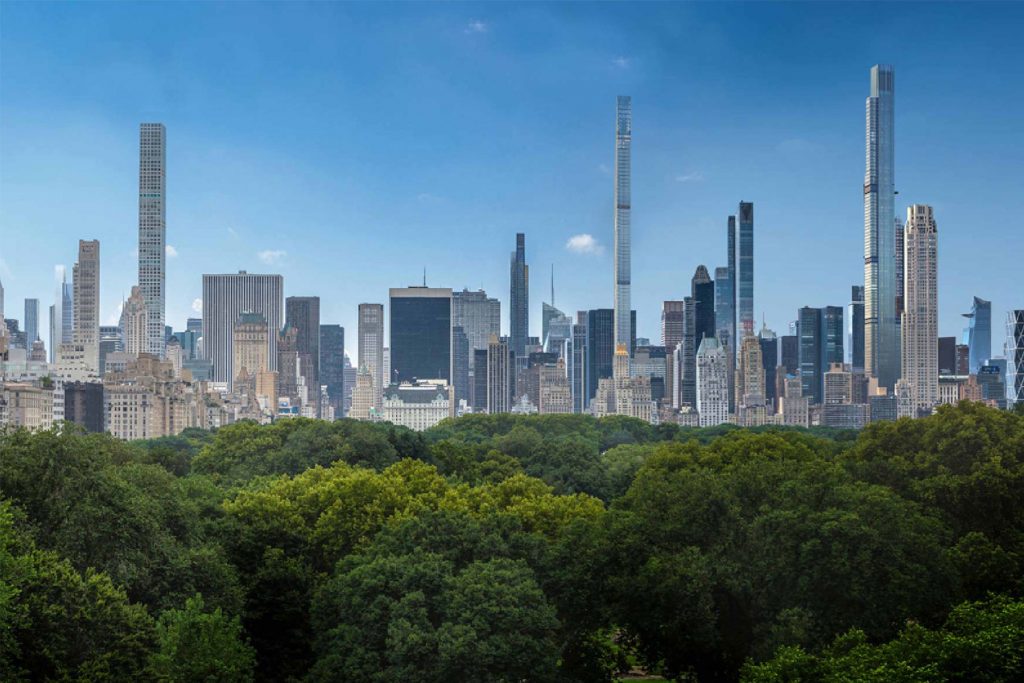 New York, the city that invented the skyscraper in the 1870s and was home to the world’s tallest building for most of the twentieth century, today has the largest number of supertalls of any city in the world. Manhattan’s seven supetalls would have been nine if the twin towers of the original World Trade Center had not been destroyed by terrorist attacks on 9/11. But then, of course, downtown's only supertall at present, One World Trade Center, would not have risen at Ground Zero.

New York’s supertalls represent two types: office and residential. While there are many corporate headquarters in the city, the great majority of its skyscrapers have always been speculative real estate ventures.  Indeed, the Empire State Building, our defining 20th-century supertall, was built without even an anchor tenant. 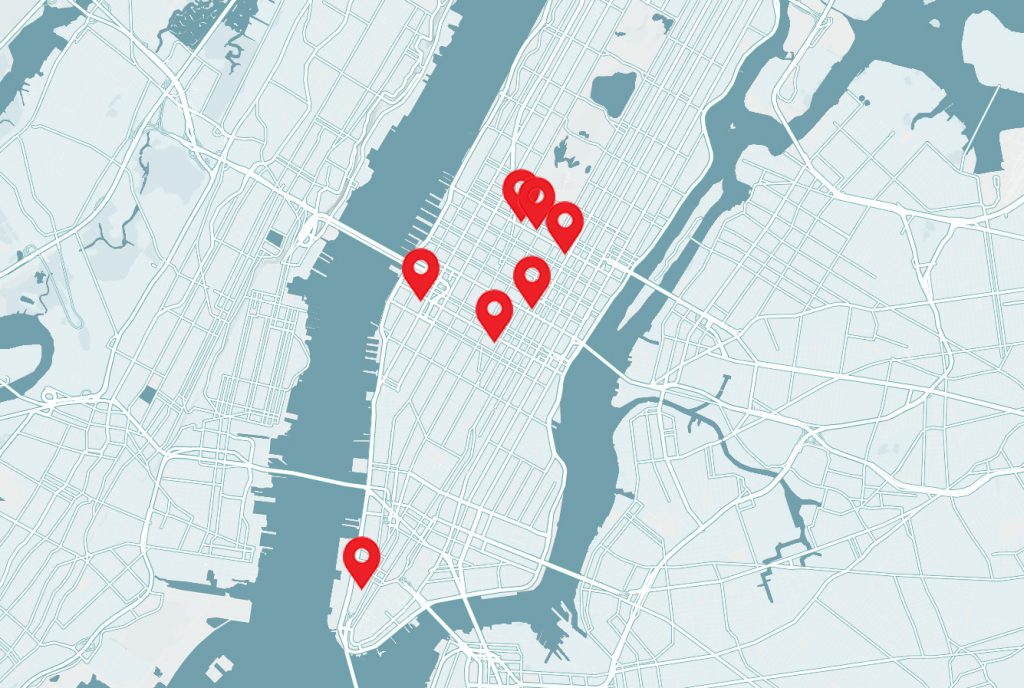 The first round of new construction after the devastating physical, economic, and psychological trauma of 9/11 was residential and began around 2009, but was stalled by the Great Recession. The three super-slender apartment towers 432 Park Avenue (2015), 111 W. 57 Street (2021) and Central Park Tower (2021) are the only ones of that new typology to surpass 380 meters. Since the completion of One World Trade Center (2014), Manhattan has also seen a resurgence of supertall office buildings in Midtown, with One Vanderbilt at Grand Central Terminal and others planned for Park Avenue, as well as the development of a new commercial and residential cluster in Far West Midtown, where at present 30 Hudson Yards (2019) is the only supertall. 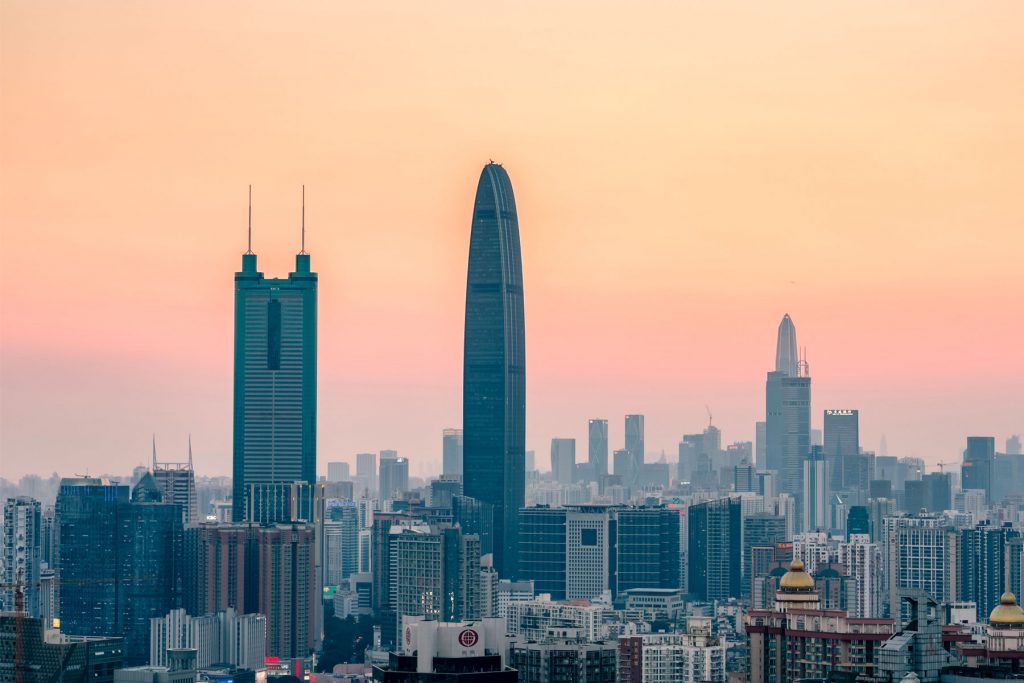 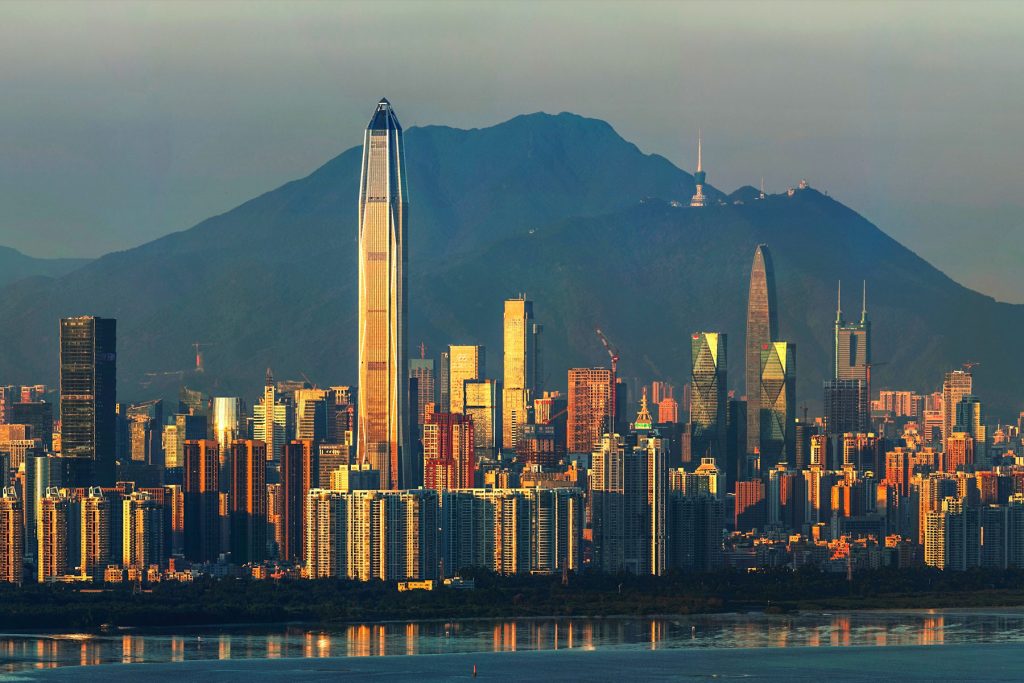 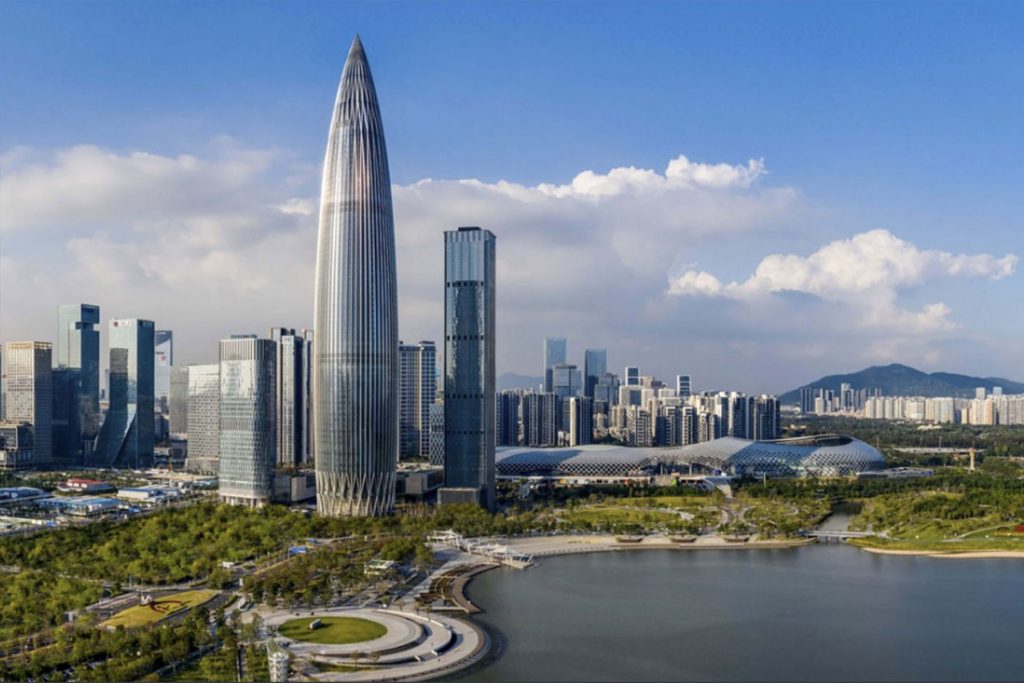 Located in the Pearl River Delta, sharing a border with Hong Kong, Shenzhen became a city in 1979 and was established as China's first special economic zone in the 1980s. Less than four decades later, Shenzhen is a metropolis of 12.5 million inhabitants and has five supertalls, second only to New York in number. The earliest, Shun Hing Square (1996) is an office building, as are the 115-story Ping An Finance Center (2017), the headquarters of the giant insurance and 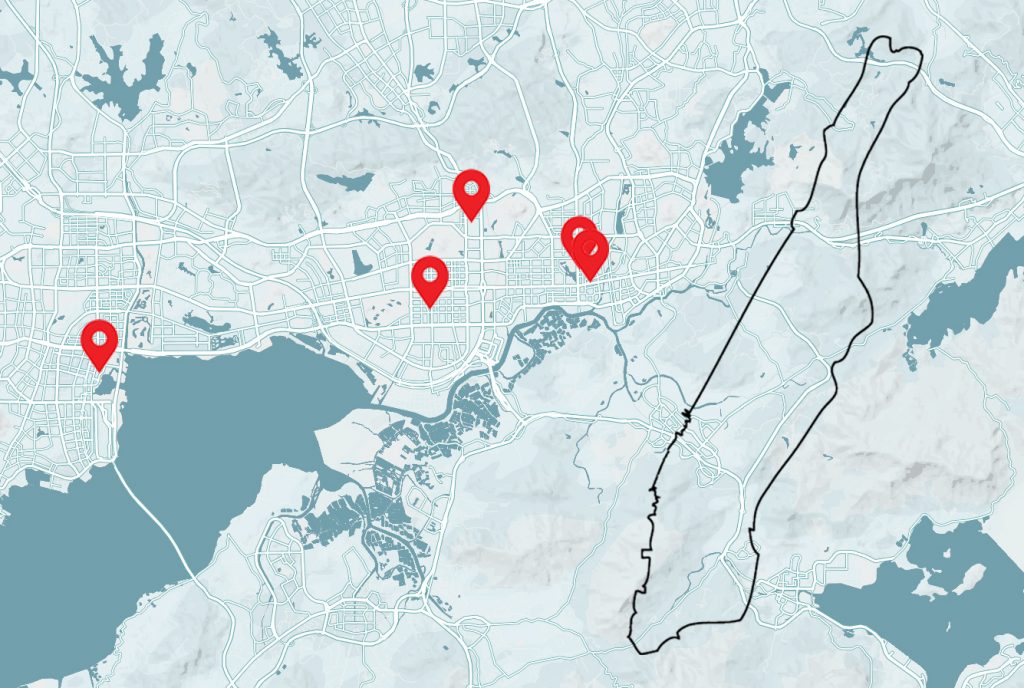 banking company, and the China Resources Tower (2019), home to the state-owned conglomerate. KK100 (2011) and Shum Yip Upperhills (2020) are mixed-use towers that include hotels on the top floors. Shenzhen's rapid and sprawling growth created a polycentric development that spreads the supertalls out across the city, up to 10 miles apart. 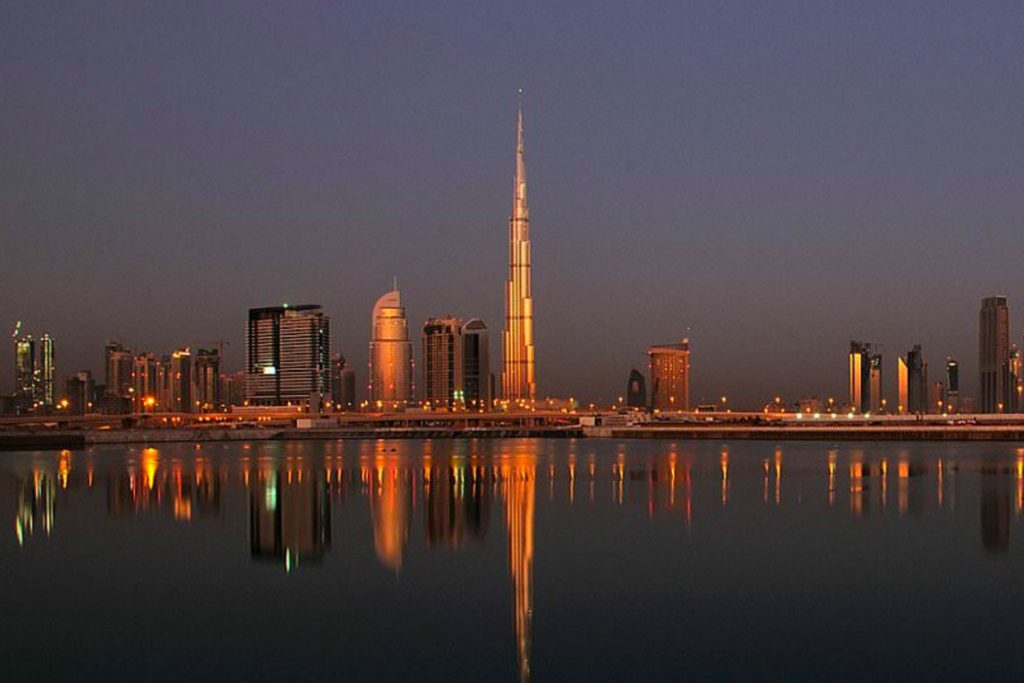 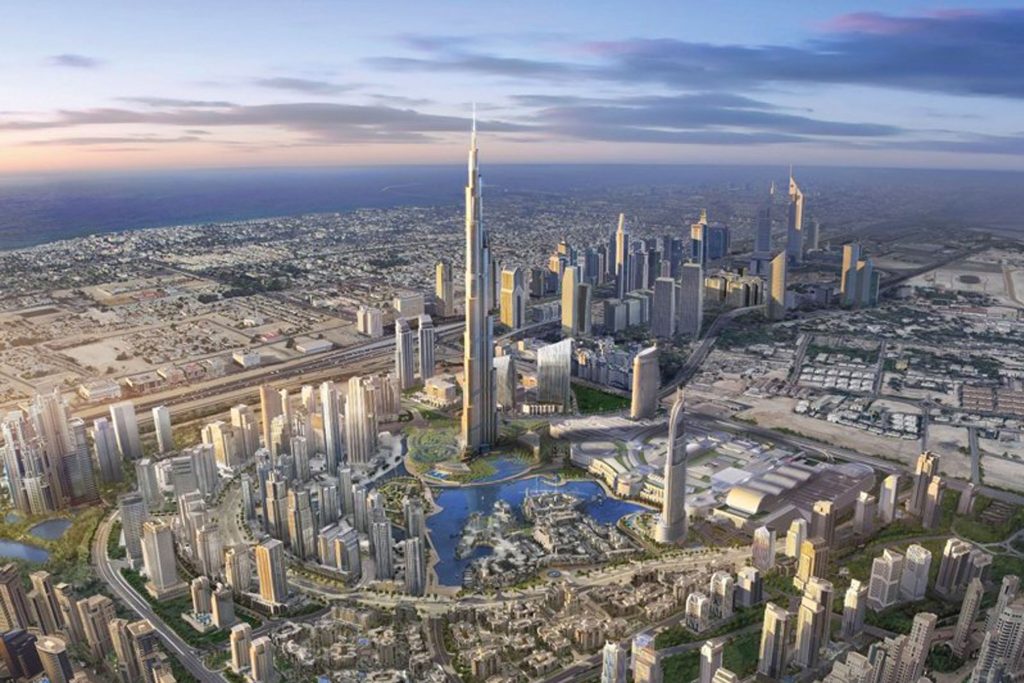 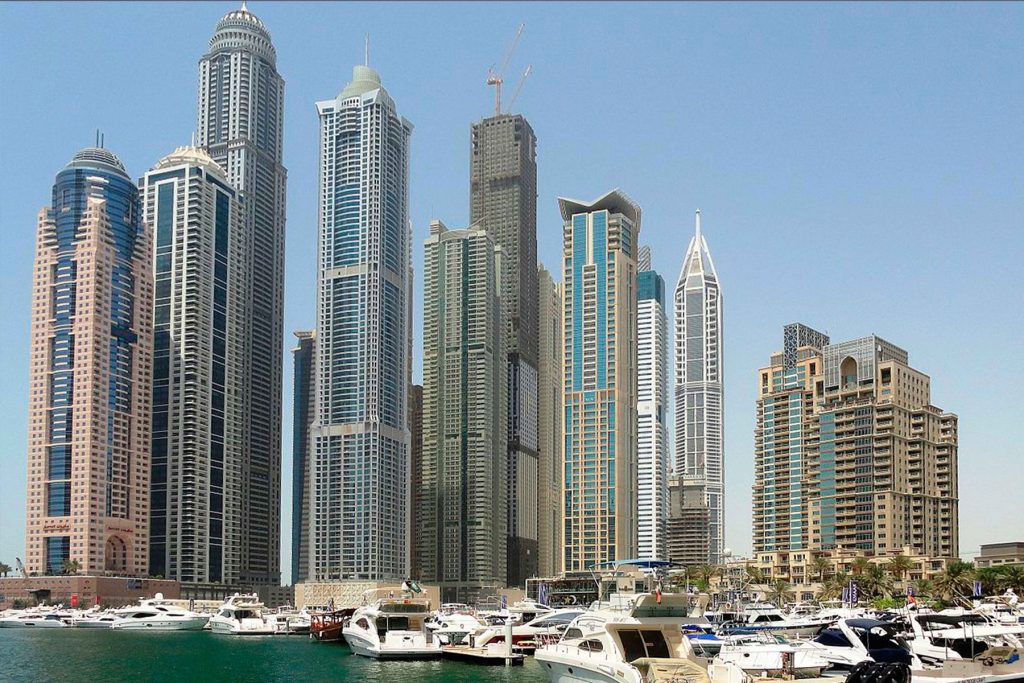 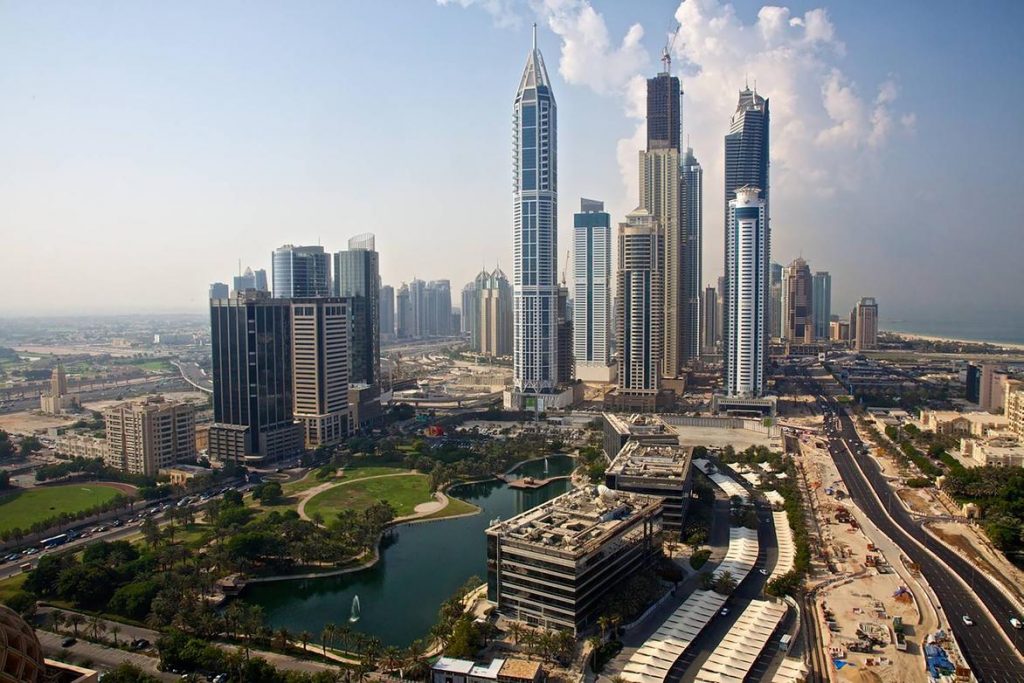 In the 1990s, Dubai, a city-state of the United Arab Emirates with a population of only around 3 million, began to position itself as the financial, commercial, and recreation center for the Gulf region. Over-the-top real estate ventures such as the artificial Palm Islands and the world’s tallest building, Burj Khalifa (2010) drove the economy. 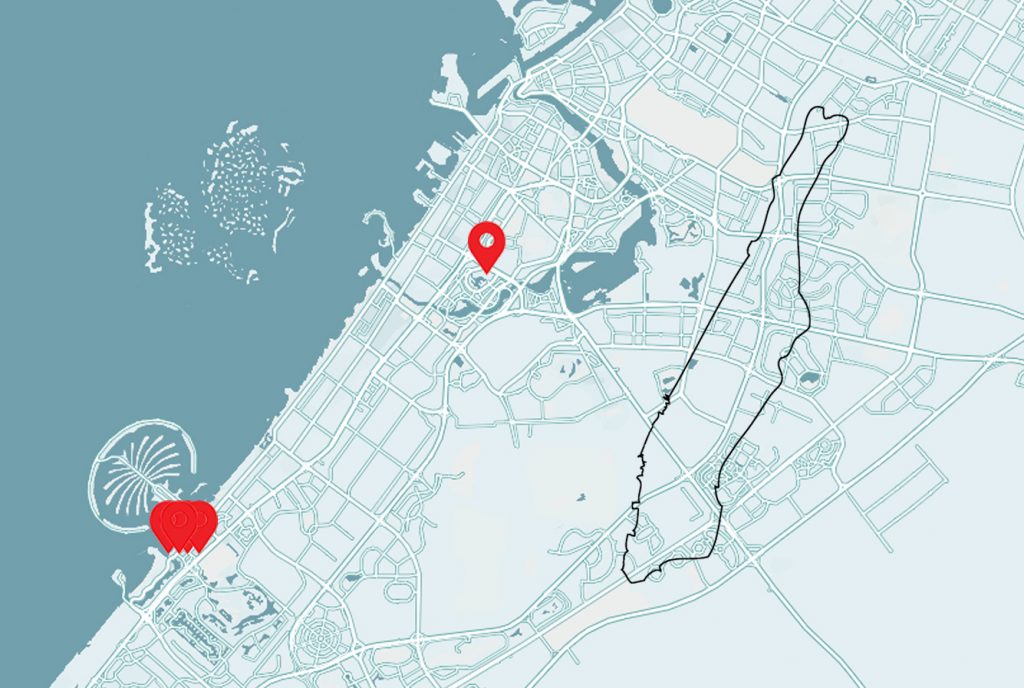 Many separate skyscraper developments were constructed at once, including the Manhattan-like skyline of Sheikh Zayed Road and the pencil-thin towers of Dubai Marina, where four supertalls crowded together on the so-called “tallest block in the world.” Including Burj Khalifa, all five towers are residential buildings or hotels. 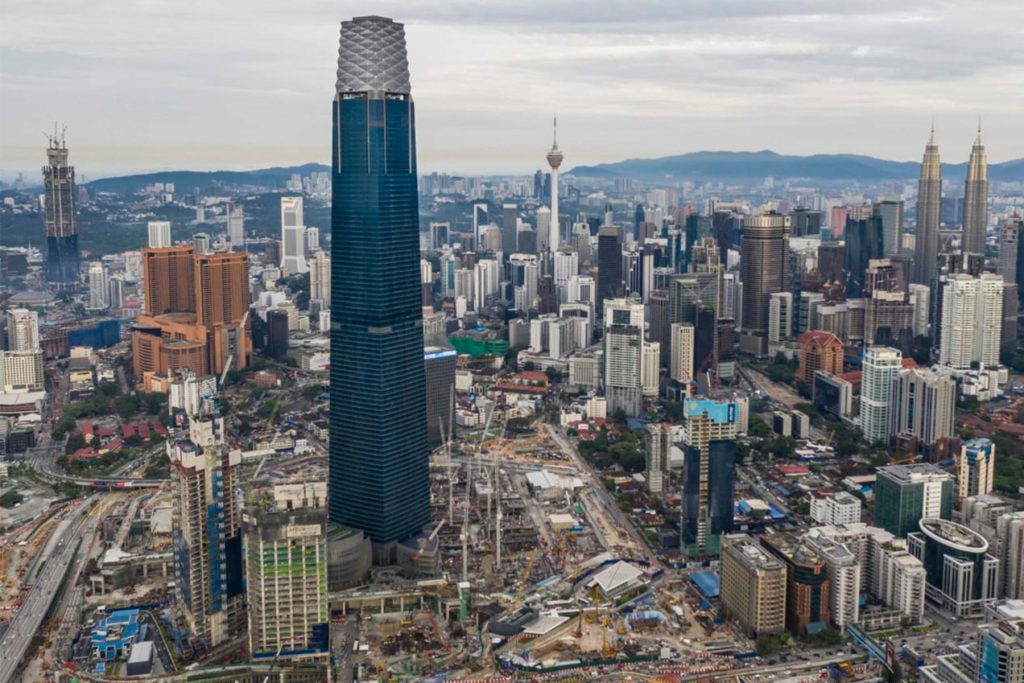 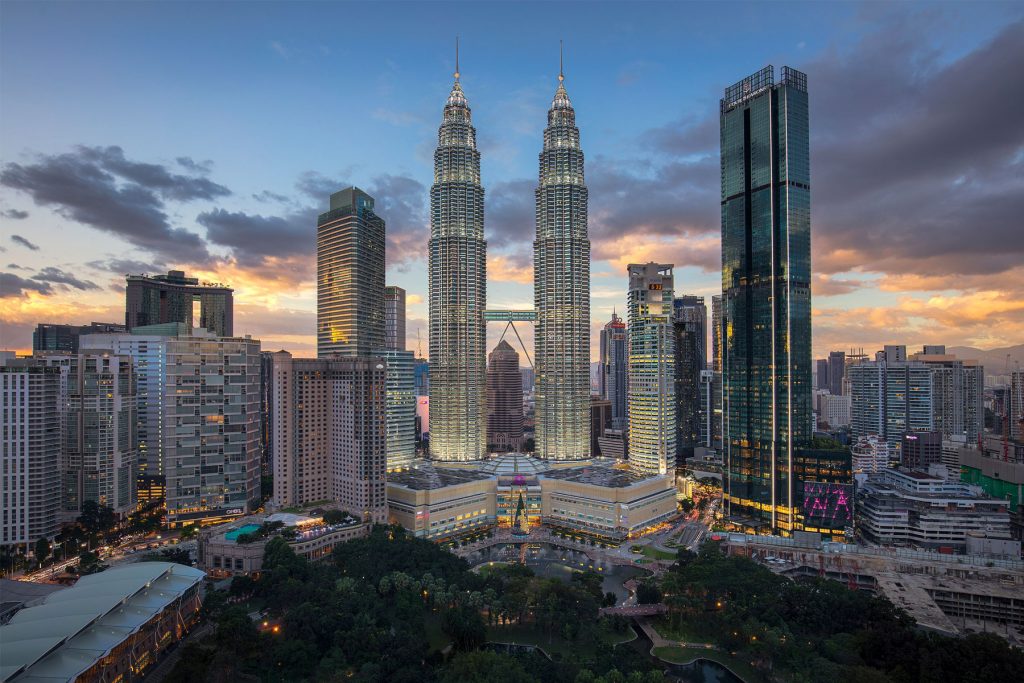 The skyline of Kuala Lumpur, the capital of Malaysia in Southeast Asia, belies its modest population of 1.8 million people. Like Dubai, the fast-growing city has embraced the supertall as both a symbol and a strategy of urban development, although its tallest towers are notably business, rather than residential buildings. In 1996, the twin Petronas Towers, developed by the government-owned oil and gas company Petronas, grabbed the title of world’s tallest building from the USA, passing the torch to a new continent.Designed by the Argentinian-American architect Cesar Pelli, the pair of towers, connected by a skybridge, project both modernity and cultural references in the stainless steel and glass forms that are based on an 8-point star, formed by intersecting squares, a reference to Islamic design and 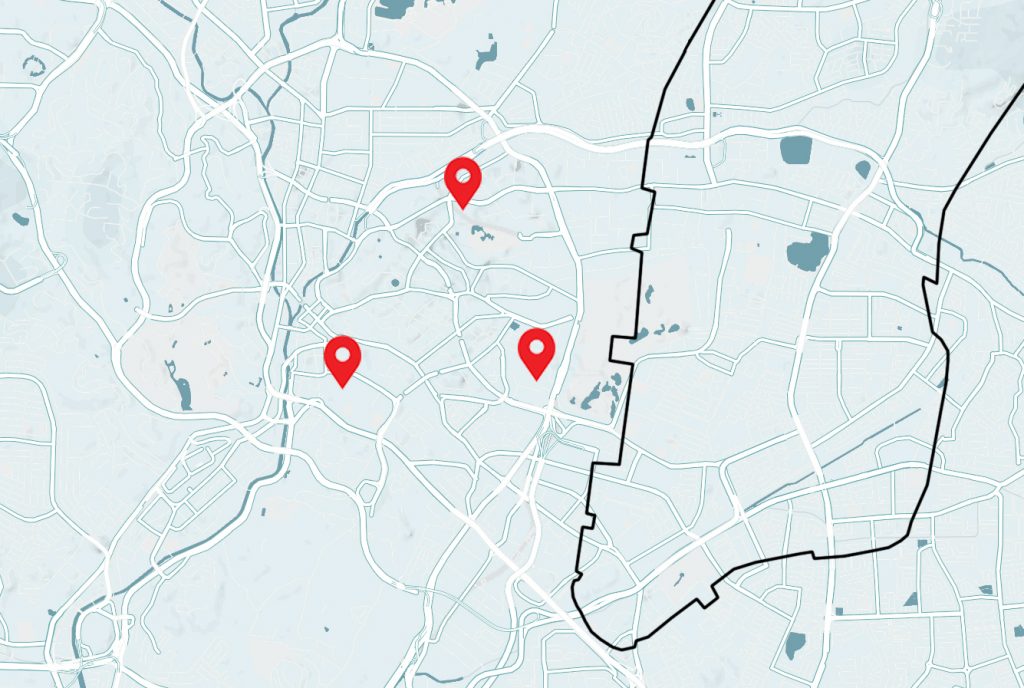 No major skyscraper would rise in the city for more than two decades, but today two new supertalls stand out only 1.5 miles from Petronas Towers, forming an almost equilateral triangle. Completed in 2019, Exchange 106 is the centerpiece of a government-sponsored new financial district and commercial complex. Now under construction, another complex on a site connected to national independence, Merdeka 118, developed by PNB Merdeka Ventures SDN Berhad, will be the city’s tallest building and at 644 m/ 2,113 ft. to the point of its spire and will surpass Shanghai Tower to become the second-tallest building in the world. 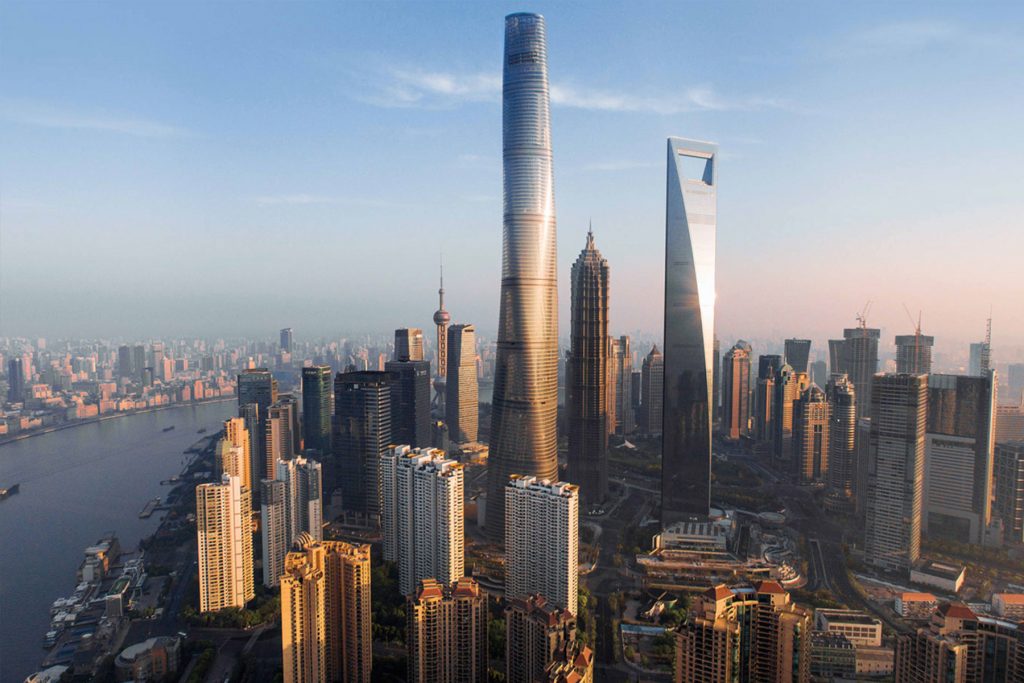 Shanghai today is a vast metropolis of some 27 million residents--the largest city in the world's most populous nation. Formerly a horizontal expanse of dense and sprawling low-rise neighborhoods, Shanghai has grown vertically in both the historic core of Puxi and in the new business district of Pudong on the east side of the Huangpu River. The master plan for the skyscraper district of Lujiazui Finance and Trade Zone, 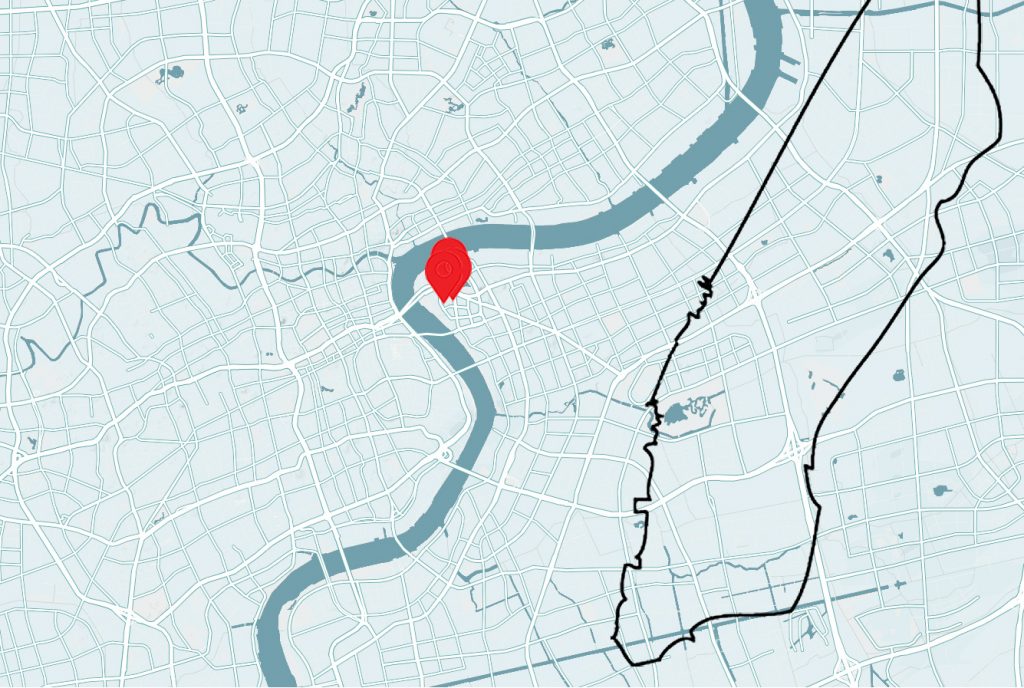 developed by the government from the mid-1990s, features the city's only three supertalls, clustered together but of very different designs: Jin Mao (1999), Shanghai World Financial Center (2008); and at 632 meters, Shanghai Tower (2015), the tallest building in the city and nation and the second-tallest in the world. 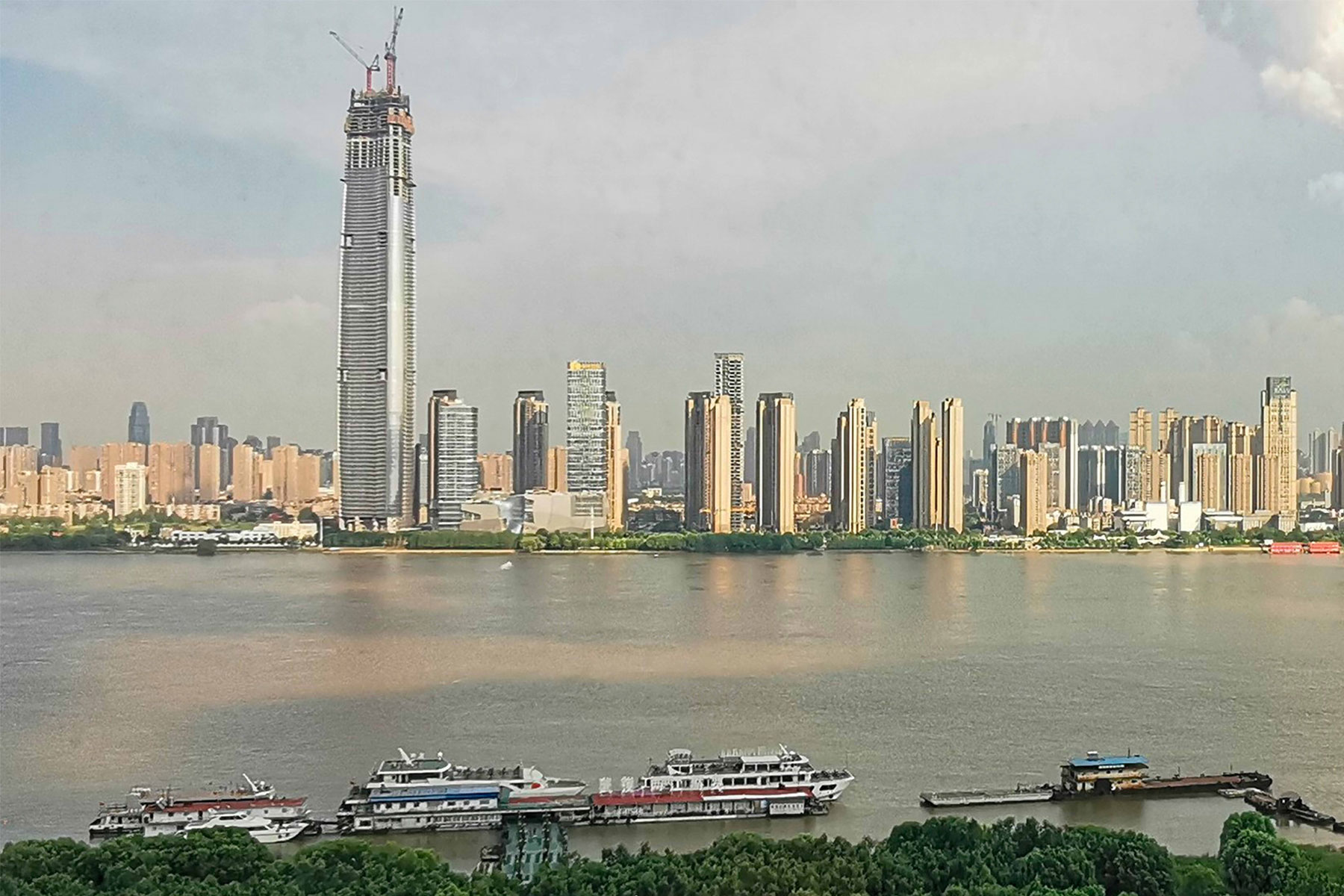 Wuhan is the capital city of the Hubei province in Central China. Composed of the historic towns of Wuchang, Hanyang, and Hankou, Wuhan consolidated in 1927 and today counts over 11 million people. Three supertalls have been planned and completed, or nearly completed, in Wuhan during the last decade: Wuhan Center Tower, Riverview Plaza A1, and Wuhan Greenland Center. Built on opposite sides of the Yangtze River but not too far apart, these mixed-use 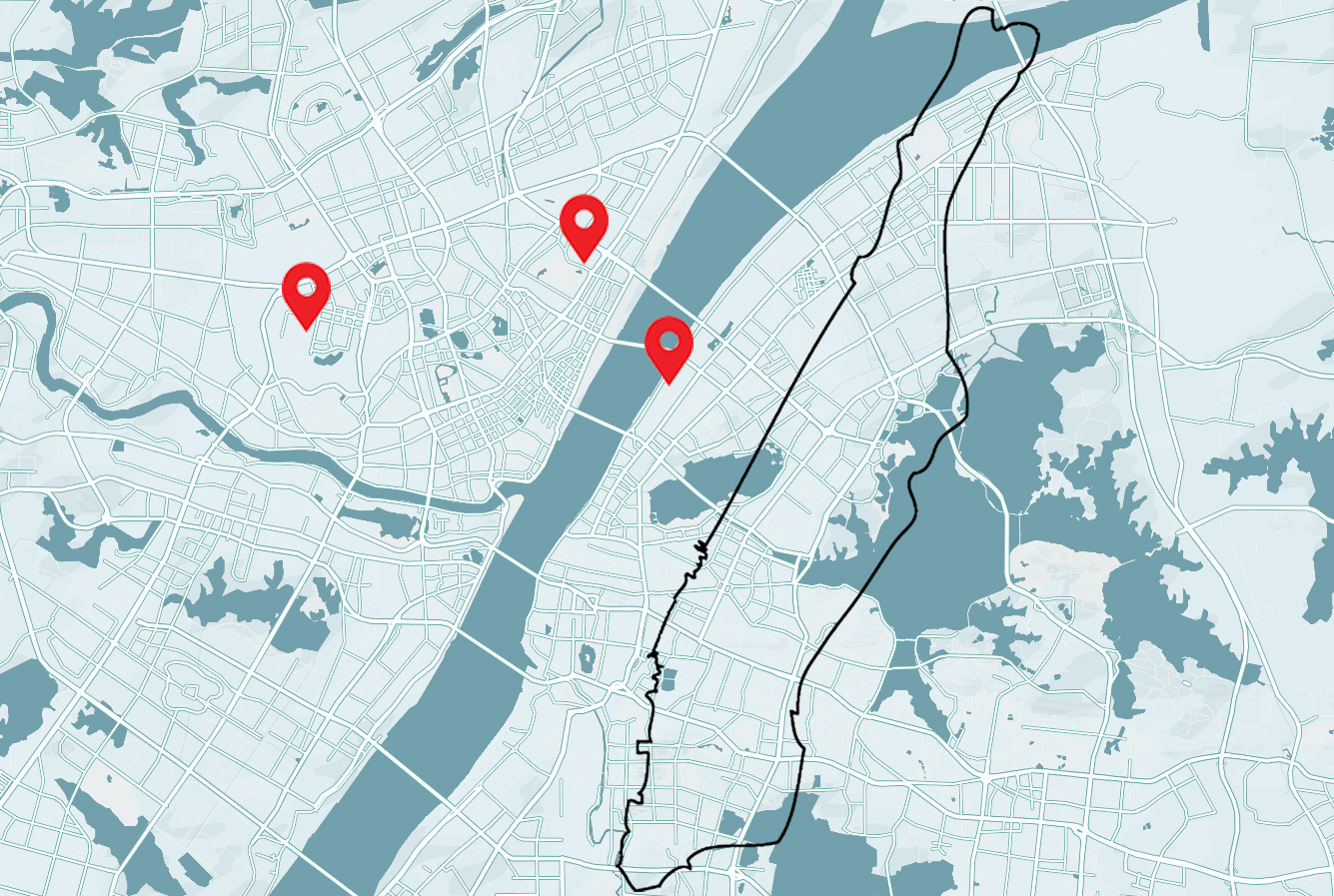 supertalls have been developed by state-owned or state-backed enterprises such as Wuhan CBD Investment Development Company, Shui On Land Limited, and Greenland Group. The tallest of these projects, Wuhan Greenland Center, by architects Adrian Smith and Gorden Gill, was originally designed to be 660 meters tall, but was capped at 1,560 ft (475 m) due to aviation regulations. 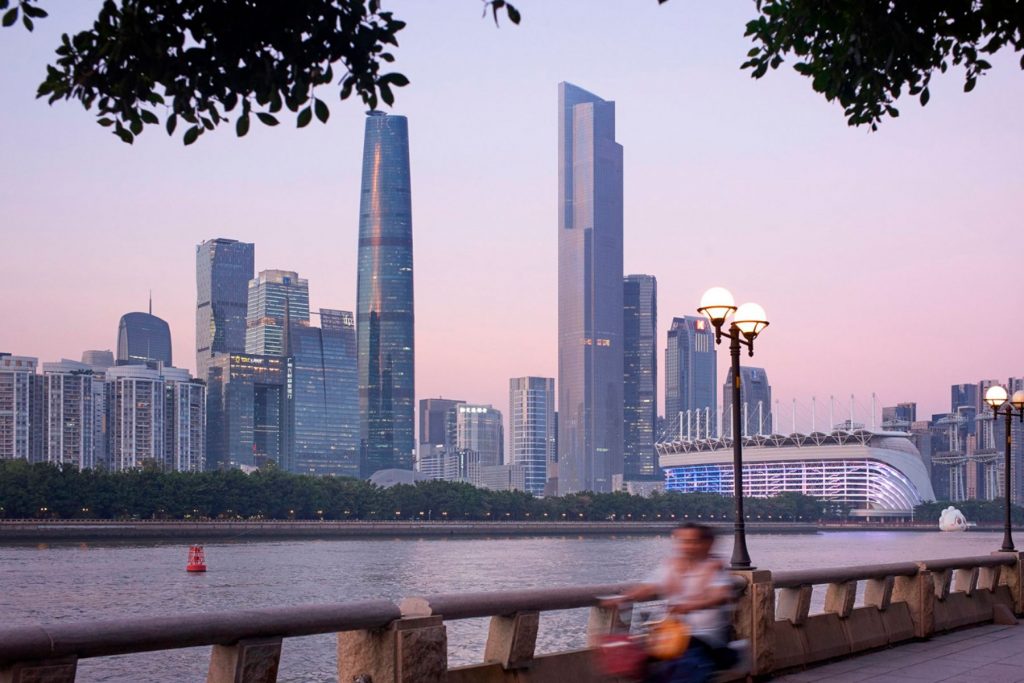 Known in British colonial days as Canton, Guangzhou today is a Chinese city of 15 million people and the capital of the Guangdong Province, a major commercial and manufacturing region in the Pearl River Delta, the most-populous metropolitan area in mainland China. Like neighboring Shenzhen about 100 km to the south, Guangzhou has grown explosively in recent decades as the population, especially of factory workers, swelled through domestic migration from the western provinces.

Guangzhou built its first supertall in 1996, the office building CITIC Plaza, near the train station.The two others in our survey, Guangzhou IFC (2010) and CTF Finance Center (2016), also known as Chow Tai 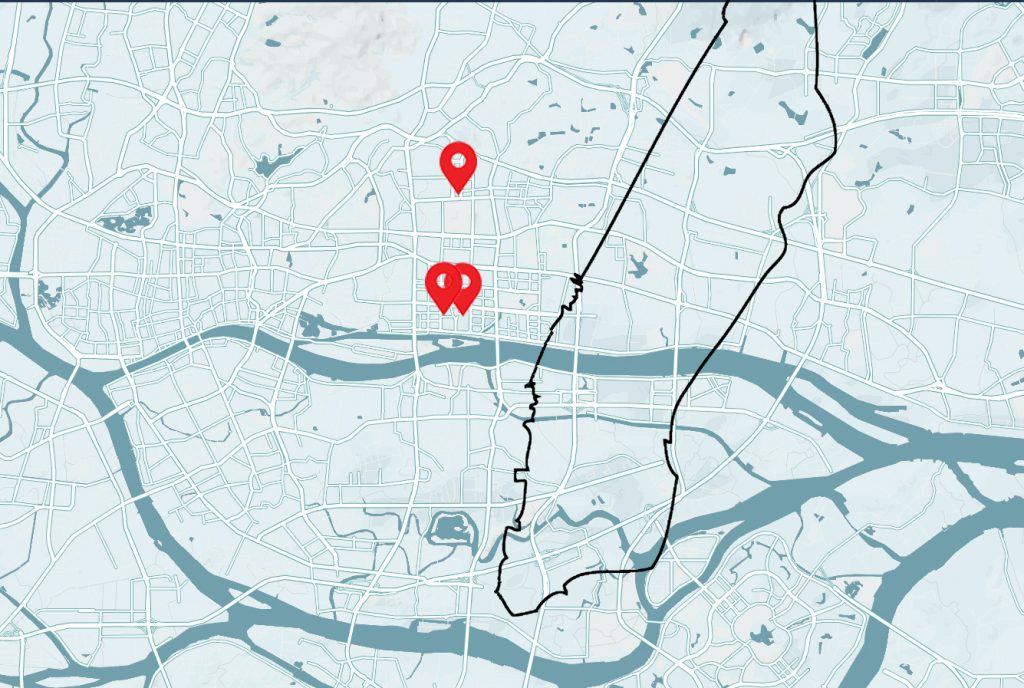 Fook or the East Tower, are a pair that mark the riverside end of a master-planned, central-city expansion, a massive swath of infrastructure and commercial development that connects to public transit below grade and to nearby buildings and below-grade retail, with a continuous park space above.

On the other side of the Pearl River, on axis with the mixed-use supertalls IFC and CTF, is a third structure known as Canton Tower, which topped out at 604 m/ 1,982 ft. in 2009. The innovative tower is principally used for TV and radio transmission and also serves as an observation deck and tourist destination that contains a vertical entertainment complex.