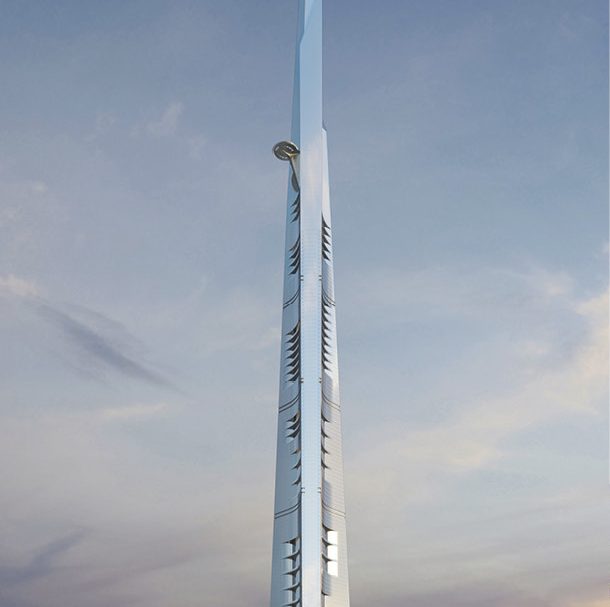 The Jeddah Tower, formerly known as Kingdom Tower and now under construction in Jeddah, Saudi Arabia, will rise to or above the target of 1,000 meters – a kilometer – and surpass the current world’s tallest building, the Burj Khalifa in Dubai, by nearly 200 meters. Jeddah, a port city on the coast of the Red Sea and the Kingdom of Saudi Arabia’s commercial capital, has grown to more than 4 million people. Jeddah Tower is the focal point of a new district in the desert, Kingdom City, a residential and commercial project designed to grow to 57 million ft².

The slender, tapering triangular form of the tower is created by a Y-shaped plan like the buttressed-core structural system developed for the Burj Khalifa. With a gross floor area of only 243,866 m. – far less usable space than One WTC, which is about half its height – the extraordinary height of the tower is unoccupied in its highest superstructure, but includes the world’s highest observation deck at 664 m. Principally residential, the tower has 325 apartments, a hotel with serviced apartments, and 7 floors of offices. The three facades feature notches that both “confuse the wind” and create shadow-shielding areas to reduce thermal loads. This high-performance facade system will also provide outdoor terraces with panoramic views of the surrounding city and the Red Sea.