Upon their completion in 1971 and 1973, the Twin Towers of the World Trade Center were the tallest and largest skyscrapers in the world. Innovative engineering carried the structures to 110 stories – 1368 and 1362 feet (417 and 415 meters) – creating floors an acre in area, with more than 4 million square feet per building. Except for the contemporary Sears Tower in Chicago, nearly 100 feet taller, but slightly smaller in total area, no single skyscraper has ever matched their scale.

To be both big and tall was a phenomenon of the 1960s and 1970s, the climax in the evolution of skyscraper size. The World Trade Center epitomized the era when faith in technology and a fascination with monumentality spurred designs for mega-structures and urban master plans. The sixteen-acre site was a “superblock” that combined fourteen city blocks into a single parcel, de-mapping streets and creating a car-free zone. The PATH commuter trains that crossed the Hudson entered the site under the towers and five-acre plaza that was also the area of the underground parking garage and the world’s largest underground shopping mall.

The World Trade Center was a government project of the bi-state agency, the Port Authority of New York and New Jersey (PANYNJ). The PANYNJ owned the land, which had been ceded to them by the City, so as a government project, the regulations over private commercial development did not constrain their design. Seven buildings comprised the complex, with 1 WTC and 2 WTC, the North and South towers, and the plaza as the centerpiece of the design. Creating the edges of the site were low-rise structures, a suite of seven story buildings known as 4 WTC, 5 WTC, and 6 WTC (the U. S. Customhouse), all designed by architect Minoru Yamasaki to harmonize with the towers and to frame the plaza. The building with the address 3 WTC, the Marriott Vista Hotel on the southwest corner of the plaza on West Street, was envisioned in the original site plan, but was designed by Skidmore, Owings & Merrill and completed in 1981. The almost-square site was extended on the north to include two blocks for an electrical substation.

September 11, 2001 defines our memory of the Twin Towers, and the profound proportions of that tragedy continue to reverberate in New York and beyond. The question of size in the urban scheme remains a complex issue for the future of tall buildings everywhere. As new spires around the world exceed the sheer height of the supertalls of the seventies, none have surpassed the overall scale of the giants of the twentieth century.

The model of the World Trade Center on display is an original model developed for, and on loan from, the Engineering Department of the Port Authority of New York and New Jersey. 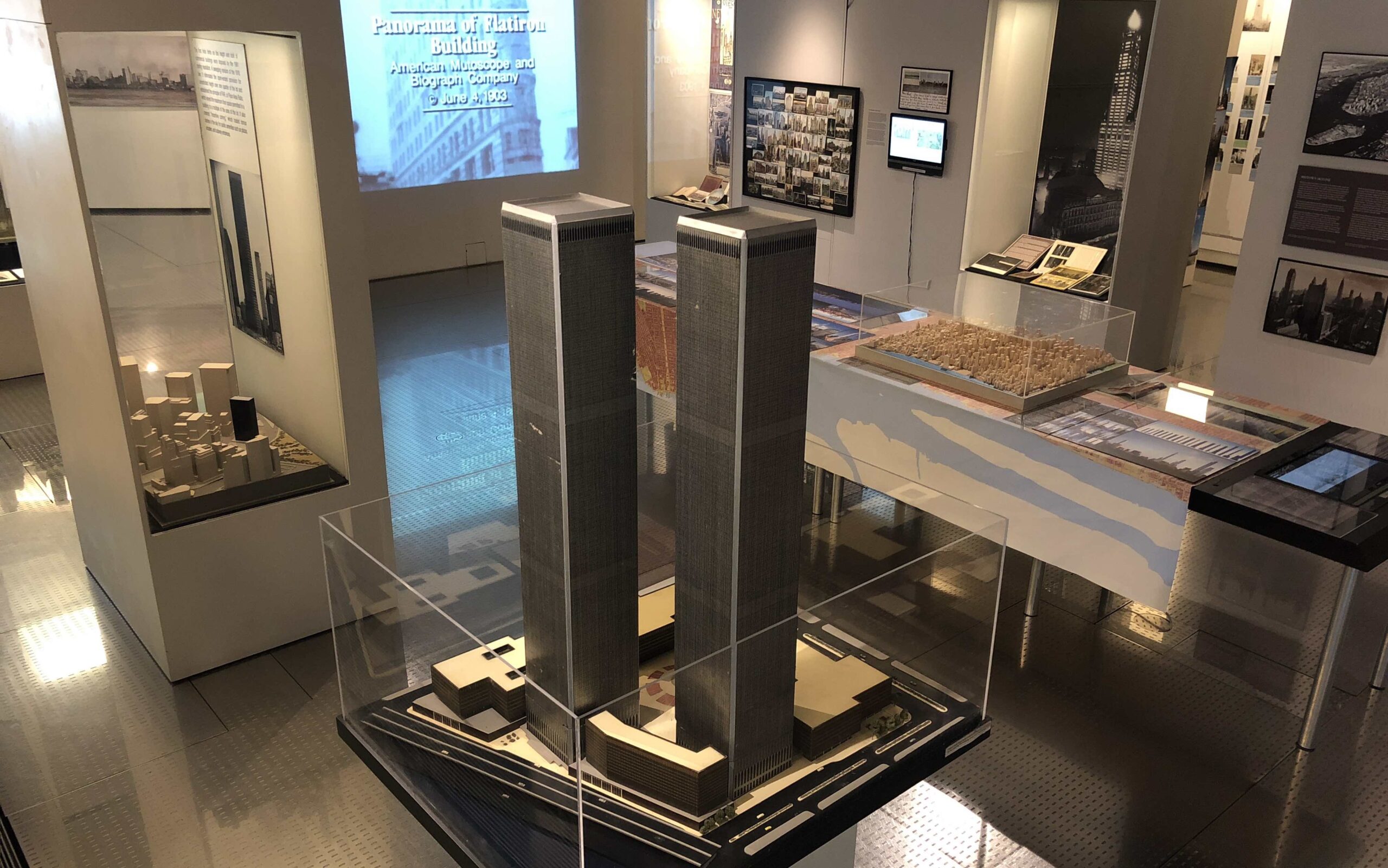