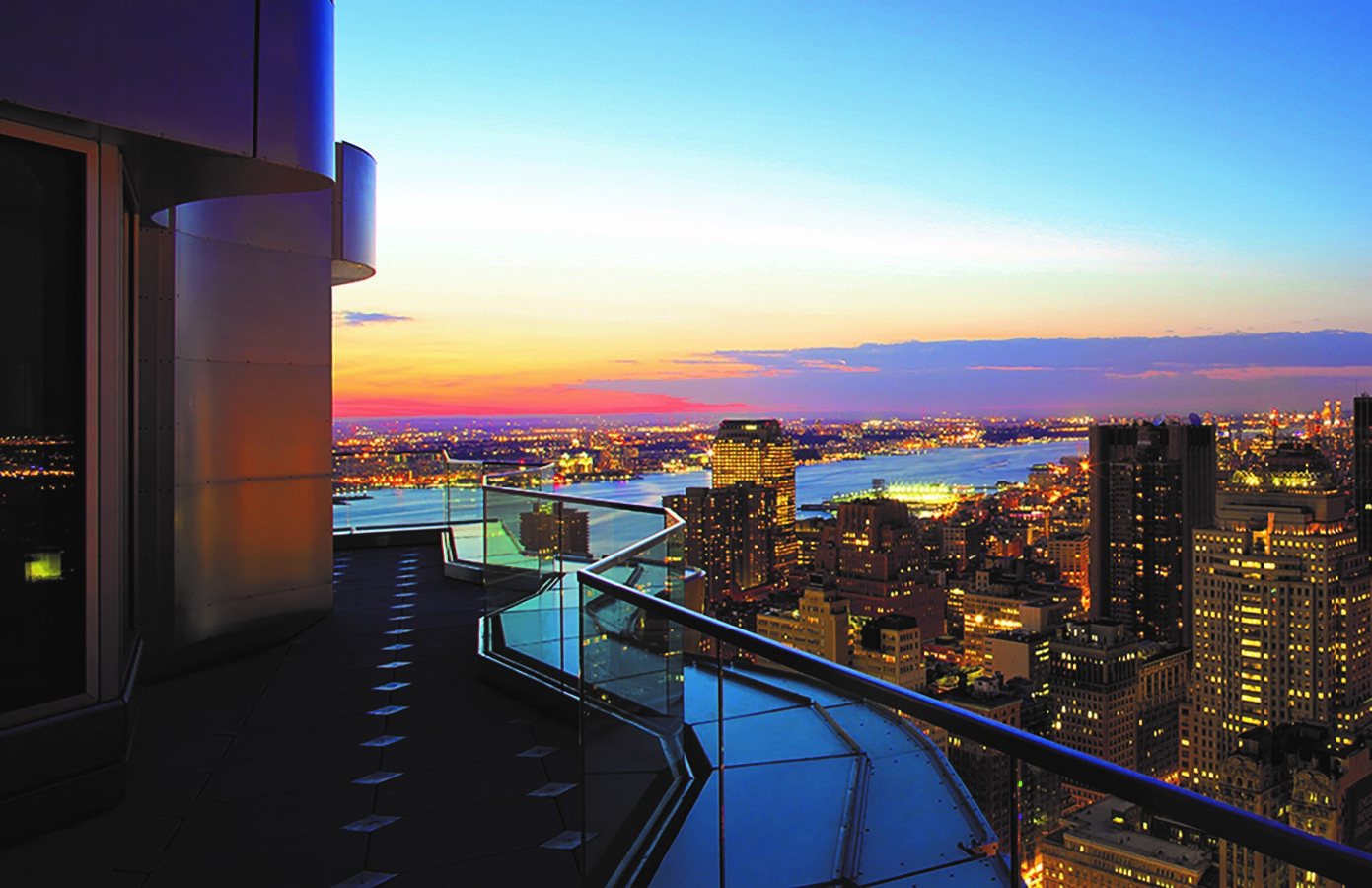 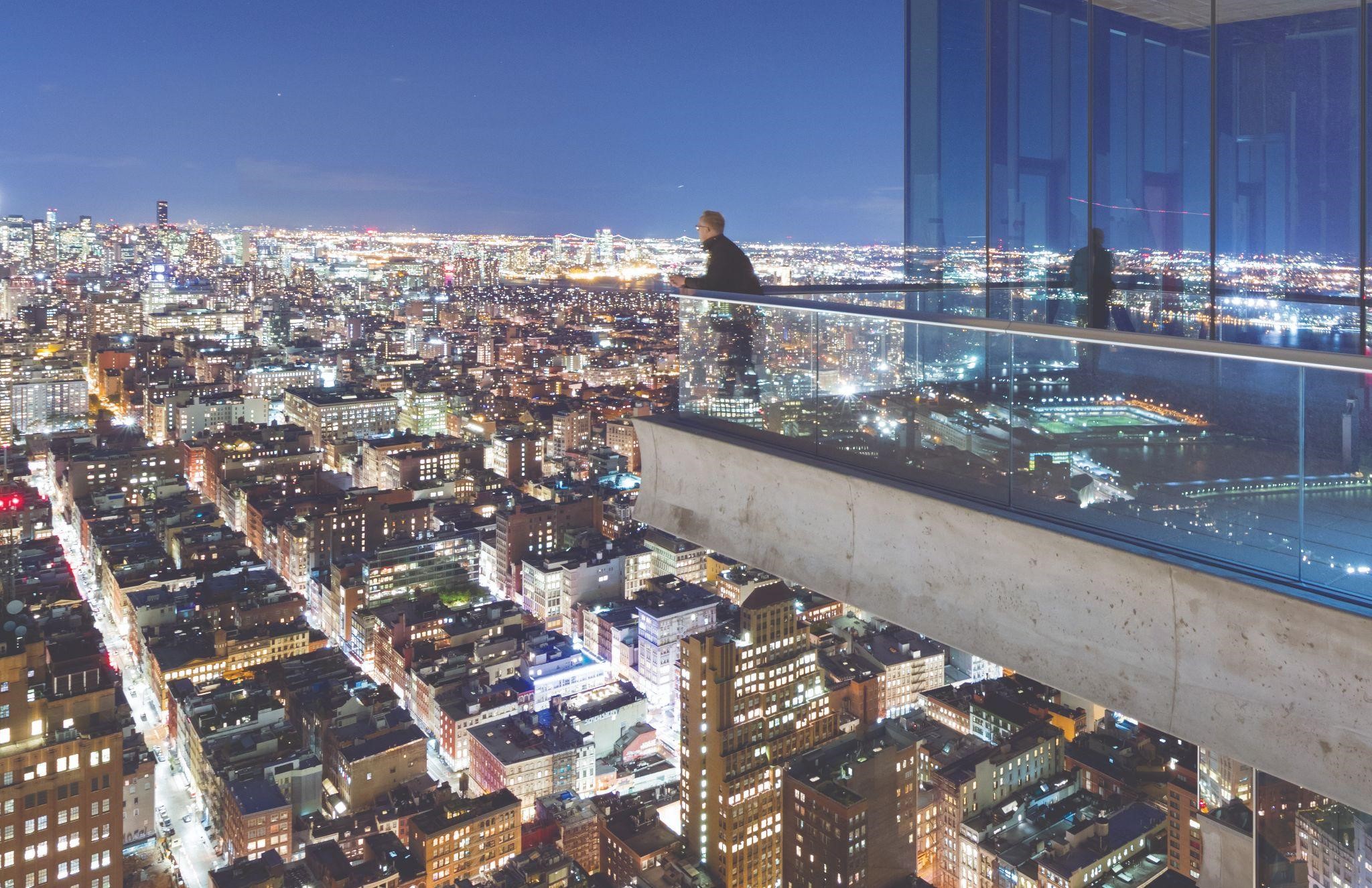 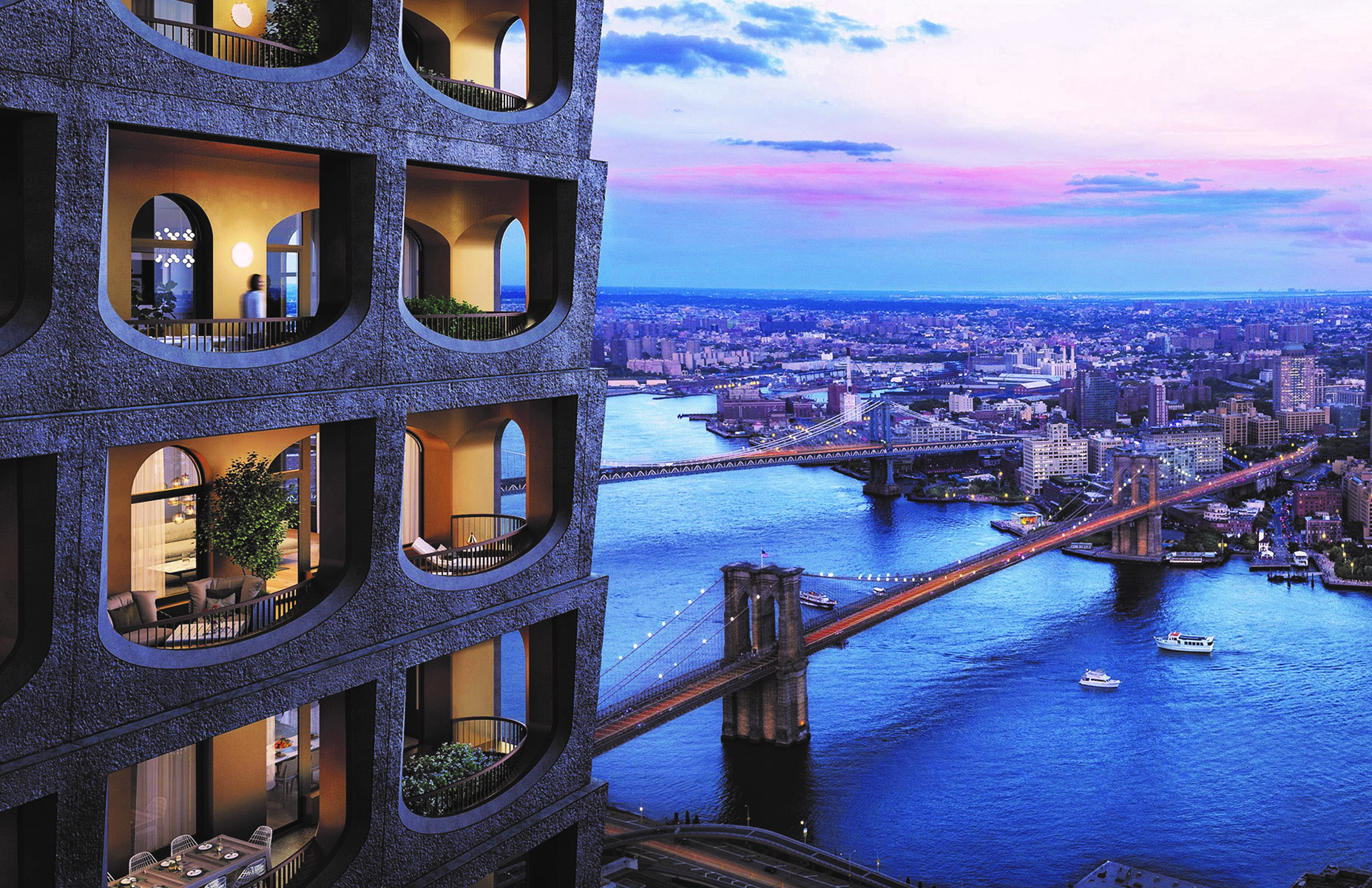 Views are the reason to build tall. And given New York City's zoning regulations, which limit square feet of floor space, not overall height, the way to construct the most spectacular apartments in the sky is to make floor plates small and stack many of them very high. The photographs and computer renderings here of the topmost floors of three of our featured towers – 8 Spruce Street, 56 Leonard, and 130 William – were created to market apartments, but their sunset and evening views capture the romance of posh penthouse privilege.

Slenderness is a design and development strategy frequently employed for luxury condominiums in New York after about 2009 when the first of the super-slender towers of “Billionaire’s Row” south of Central Park – One57, designed by the French Pritzker Prize architect Christian de Portzamparc – began to rise. Engineers describe a building as “slender" if its height-to-base ratio is at least 1:10 or 1:12.

The chart of silhouettes reprises a study The Skyscraper Museum created for its 2013 exhibition SKY HIGH & the Logic of Luxury, which was further developed in an online project titled New York's Super-Slenders. Here, the four Downtown super-slenders in Residential Rising are shown in blue. 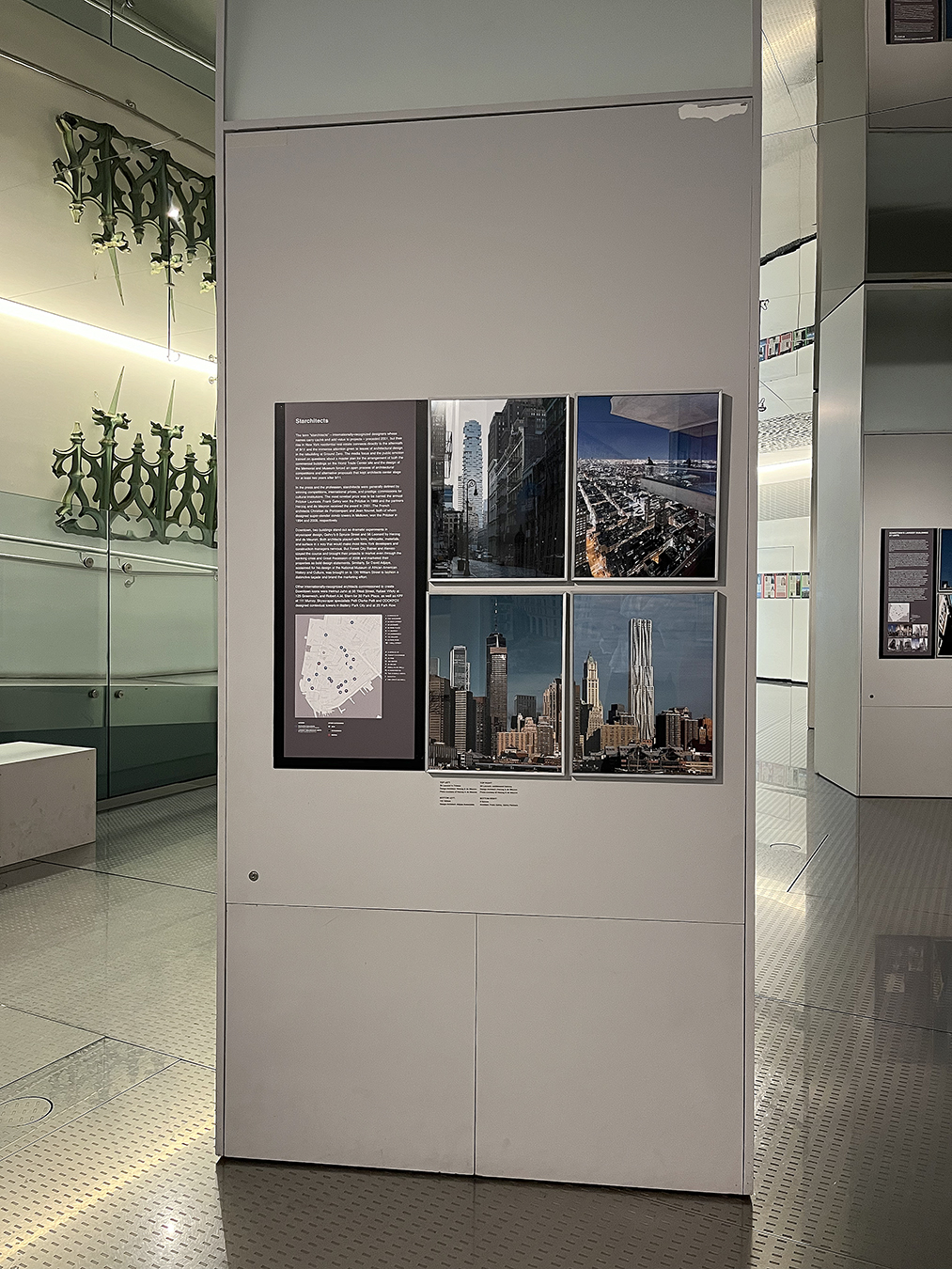 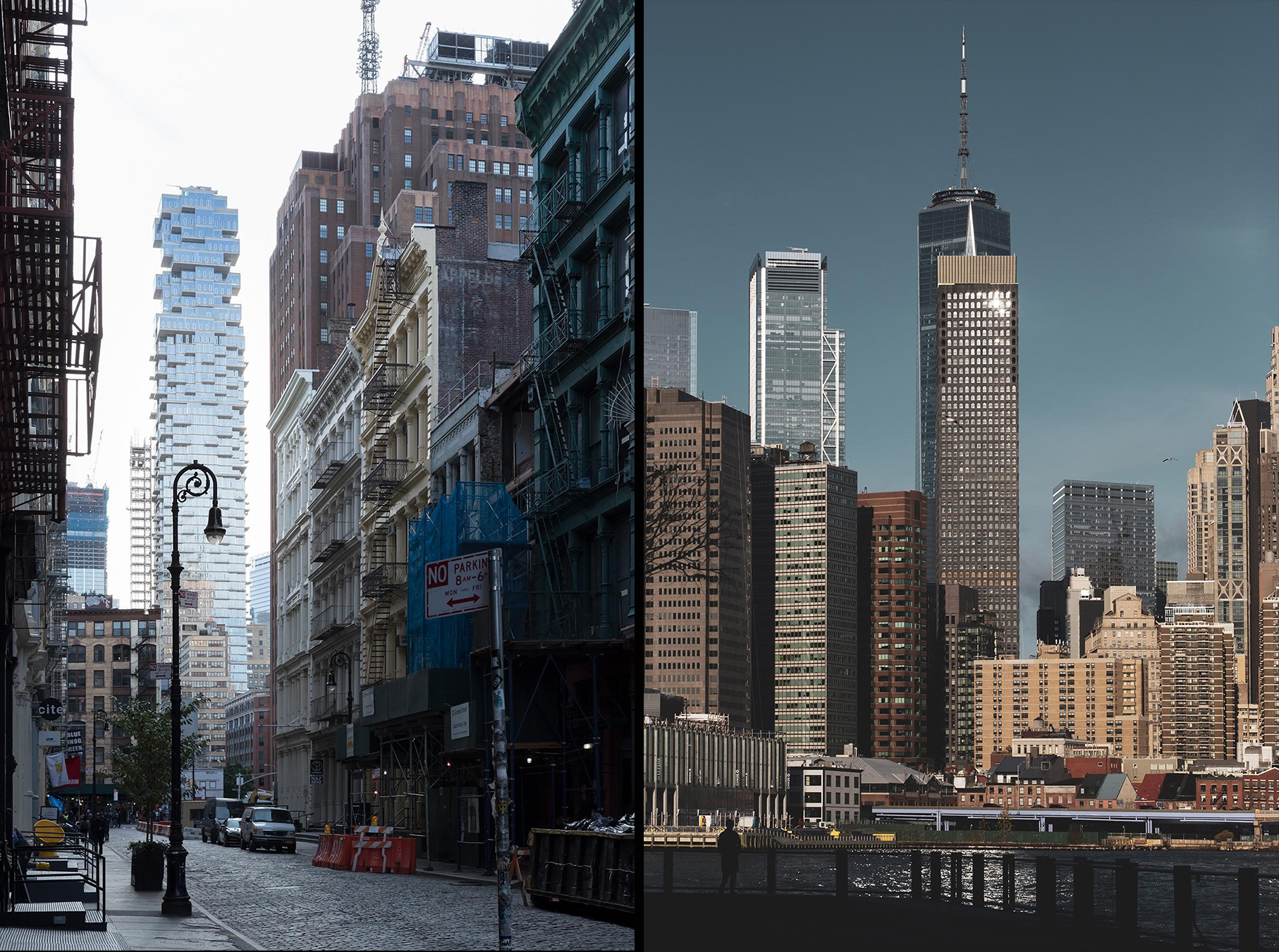 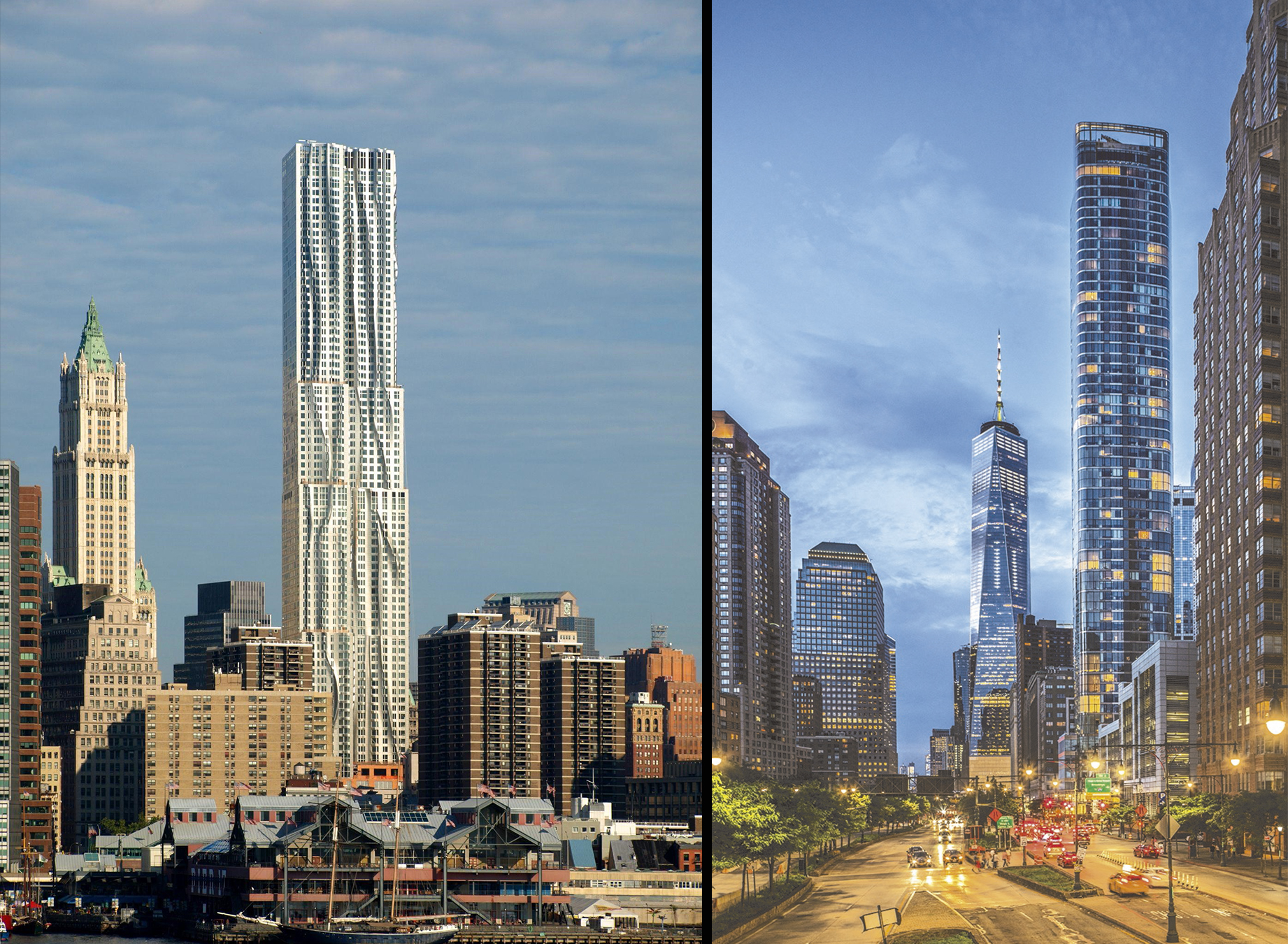 The term “starchitects” – internationally-recognized designers whose names carry caché and add value to projects – preceded 2001, but their rise in New York residential real estate connects directly to the aftermath of 9/11 and the immense attention given to issues of architectural design in the rebuilding at Ground Zero. The media focus and the public emotion trained on questions about a master plan for the arrangement of both the commercial buildings on the World Trade Center site and the design of the Memorial and Museum forced an open process of architectural competitions and alternative proposals that kept architects center stage for at least two years after 9/11.

In the press and the profession, starchitects were generally defined by winning competitions, international prizes, and prestige commissions for cultural institutions. The most coveted prize was to be named the annual Pritzker Laureate. Frank Gehry won the Pritzker in 1989 and the partners Herzog and de Meuron received the award in 2001. The French architects Christian de Portzamparc and Jean Nouvel, both of whom designed super-slender condo towers in Midtown, won the Pritzker in 1994 and 2008, respectively.

Downtown, two buildings stand out as dramatic experiments in skyscraper design, Gehry’s 8 Spruce Street and 56 Leonard by Herzog and de Meuron. Both architects played with form, silhouette, materials, and surface in a way that would make most New York developers and construction managers nervous. But Forest City Ratner and Alexico stayed the course and brought their projects to market even through the banking crisis and Great Recession of 2008 and marketed their properties as bold design statements. Similarly, Sir David Adjaye, acclaimed for his design of the National Museum of African American History and Culture, was brought on to 130 William Street to fashion a distinctive façade and brand the marketing effort. 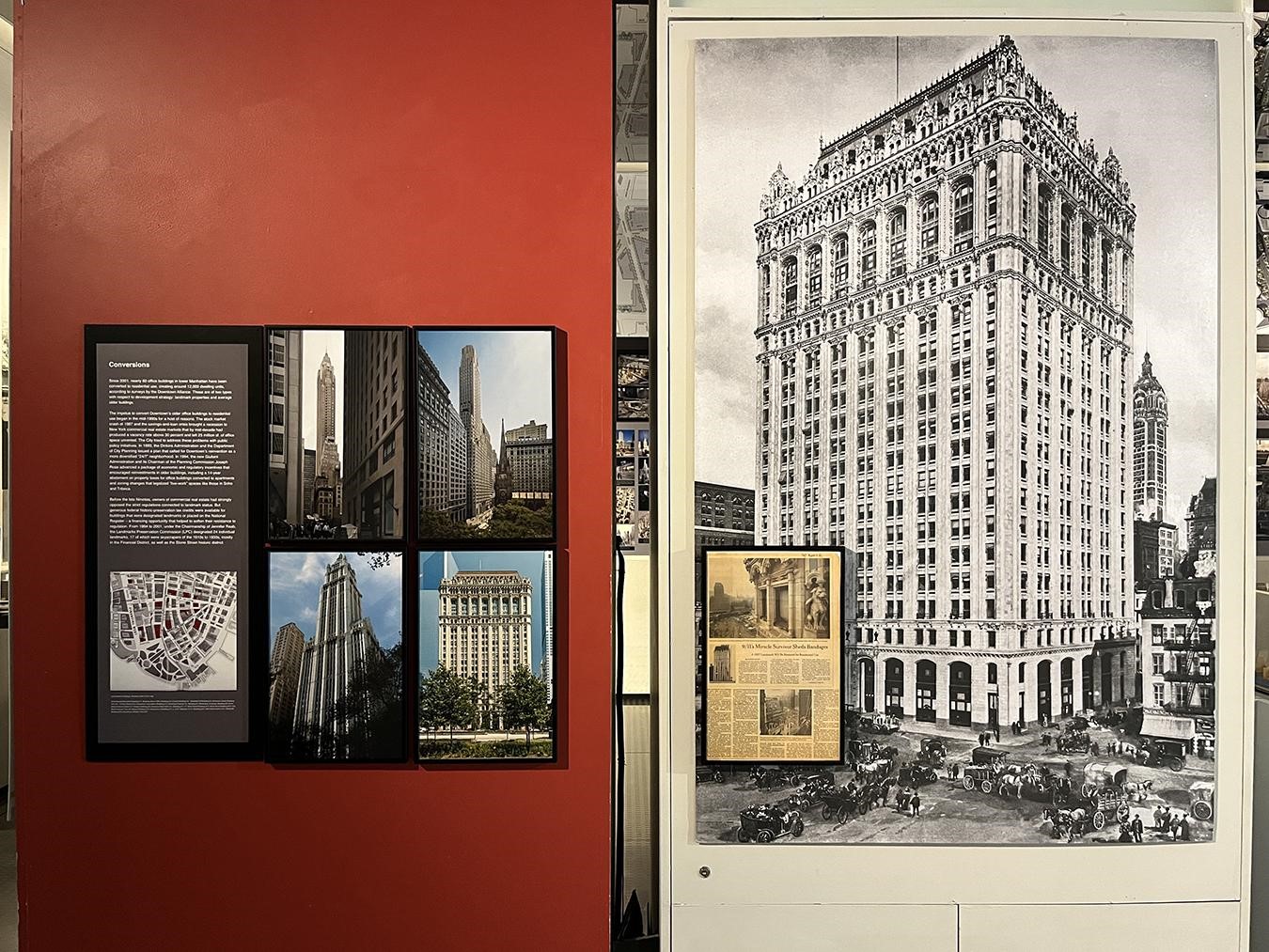 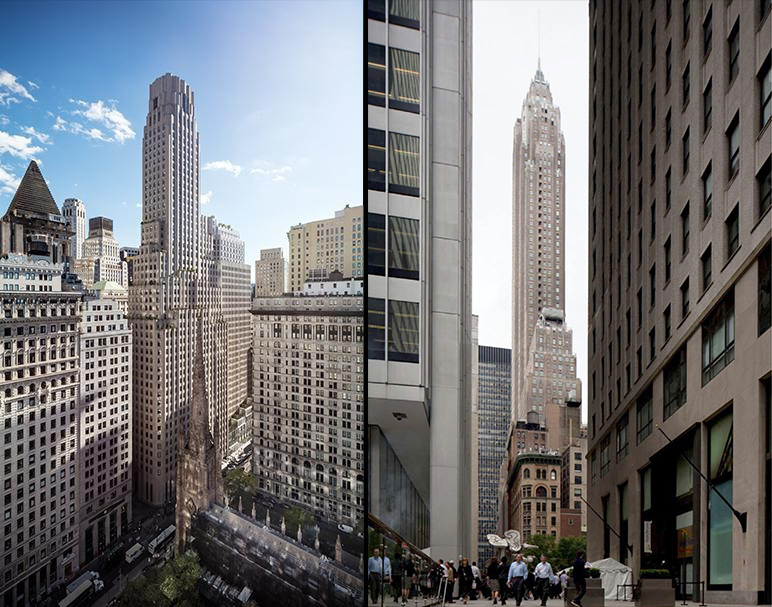 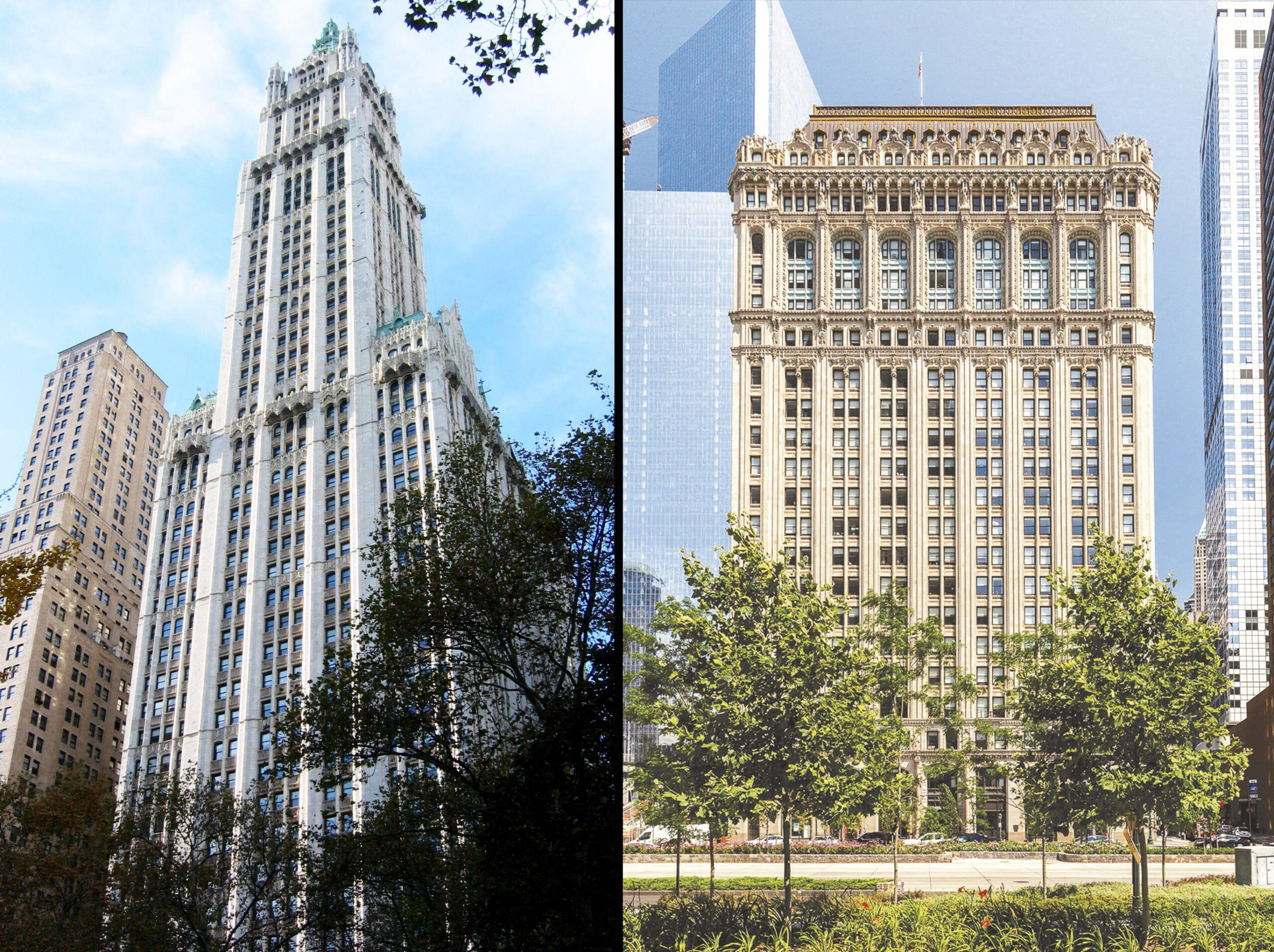 Since 2001, nearly 60 office buildings in lower Manhattan have been converted to residential use, creating around 12,000 dwelling units, according to surveys by the Downtown Alliance. These are of two types with respect to development strategy: landmark properties and average older buildings.

The impetus to convert Downtown’s older office buildings to residential use began in the mid-1990s for a host of reasons. The stock market crash of 1987 and the savings-and-loan crisis brought a recession to New York commercial real estate markets that by mid-decade had produced a vacancy rate above 30 percent and left 25 million sf. of office space unrented. The City tried to address these problems with public policy initiatives. In 1993, the Dinkins Administration and the Department of City Planning issued a plan that called for Downtown’s reinvention as a more diversified “24/7” neighborhood. In 1994, the new Giuliani Administration and its Chairman of the Planning Commission Joseph Rose advanced a package of economic and regulatory incentives that encouraged reinvestments in older buildings, including a 14-year abatement on property taxes for office buildings converted to apartments and zoning changes that legalized “live-work” spaces like those in Soho and Tribeca.

Before the late Nineties, owners of commercial real estate had strongly opposed the strict regulations connected to landmark status. But generous federal historic-preservation tax credits were available for buildings that were designated landmarks or placed on the National Register – a financing opportunity that helped to soften their resistance to regulation. From 1994 to 2001, under the Chairmanship of Jennifer Raab, the Landmarks Preservation Commission (LPC) designated 24 individual landmarks, 17 of which were skyscrapers of the 1910s to 1930s, mostly in the Financial District, as well as the Stone Street historic district. 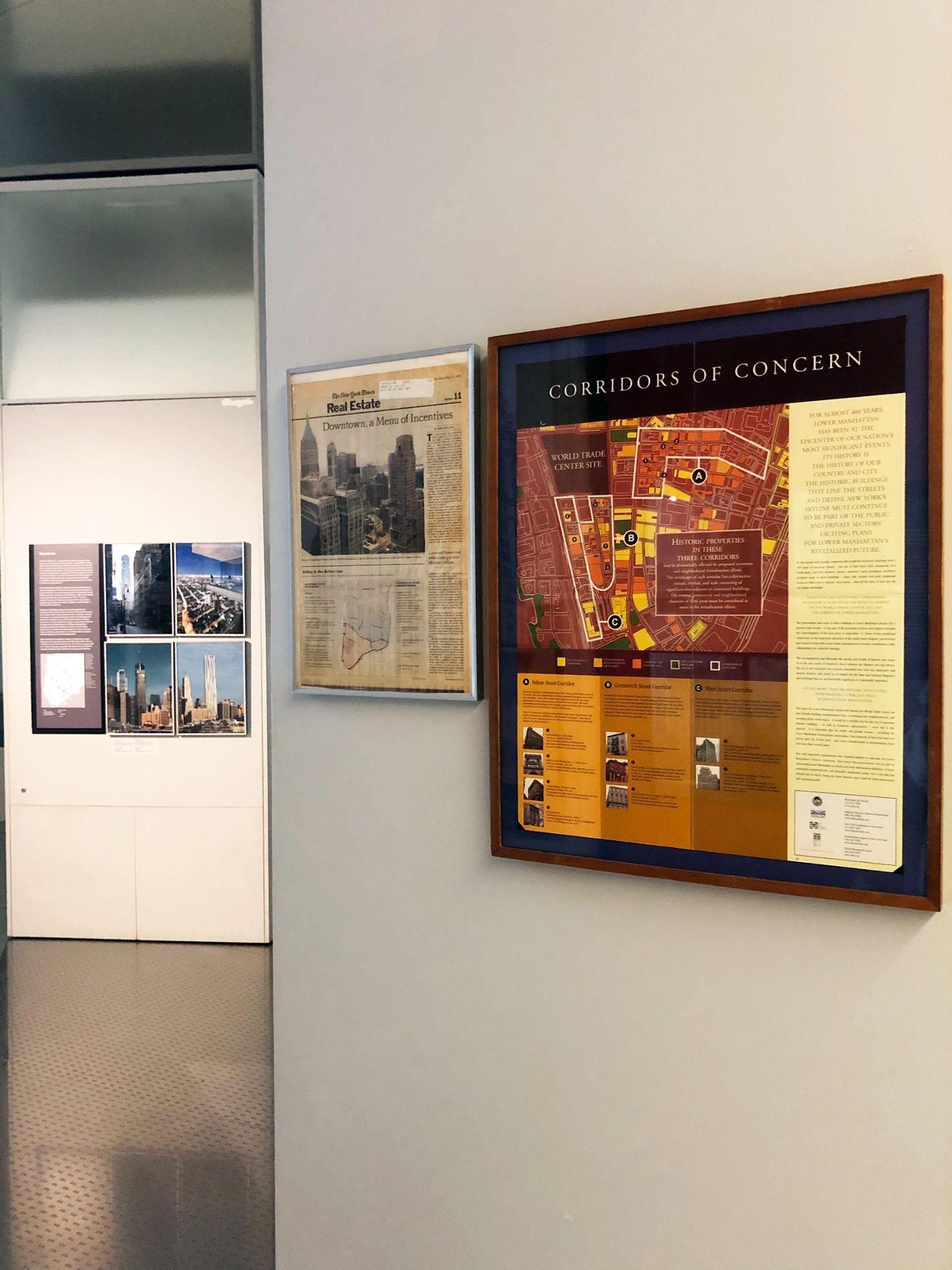 The framed newspaper article and poster map date from 2002 and attest to massive efforts of government to protect businesses, buildings, and people directly affected by the cataclysmic collapse of the Twin Towers. As John Holusha wrote in The New York Times of May 19, 2002:

“To help revive the downtown office market in the wake of the Sept. 11 attack, a complex set of federal, state and city incentives - cash allowances and tax breaks - are being offered to businesses that renew leases or move into the area.”

The article focused only on office space and reported that the incentives, together with reduced rents after the attack, lowered the cost of office space to 40 to 45 percent of Midtown.” There were also subsidies to companies for retaining or attracting new employees, as well as many other programs.

These thumbs on the scales began to cause alarm among preservation and civic groups who feared that too-rapid redevelopment would threaten Downtown’s historic urban fabric. Five organizations formed a coalition to “protect the distinctive texture, rhythm, and scale” of several streetscapes they believed were endangered by “overzealous economic and neighborhood revitalization efforts.” The poster and map present three neighborhoods, or “Corridors of Concern,” they believe merited protection: Fulton, Greenwich, and West streets.