Completed in 1930, London Terrace was the densest apartment development in the city. Composed of fourteen inter-connected buildings, the complex occupied a full city block and enclosed a large landscaped courtyard. Developer Henry Mandel, like his contemporary Fred French, believed the future of New York lay in redevelopment of old neighborhoods into urbane blocks of high-rise buildings with abundant amenities. Apartments were small and rented mostly to individuals or childless couples.

The unit shown here, Type C, faces either the street or the interior courtyard. It is considered a studio – a large room with support spaces on either side. One side contains a generous kitchen; the other, the entry, bathroom, and “dressing room.”

In a bid to prove housing built by and for workers could be as high in quality as that built for profit, the sponsors employed a network of small corridors internal to the apartments to create separate zones of public and private use. An oversized foyer doubled as multivalent space between the entry, kitchen, and living room. The dimensions recalled pre-war market-rate apartments and could accommodate bookcases and grouped seating.

The living room opened through floor-to-ceiling glass doors onto a large balcony that offered ample sunlight and fresh air and compensated for the lack of cross-ventilation (central air conditioning kept the apartments cool in the summer). Grouping the bathroom and kitchen allowed for efficient distribution of building services and enhanced privacy. Bedrooms were placed on a corridor off the opposite side of the foyer, separated from the living areas by the bathroom and kitchen. 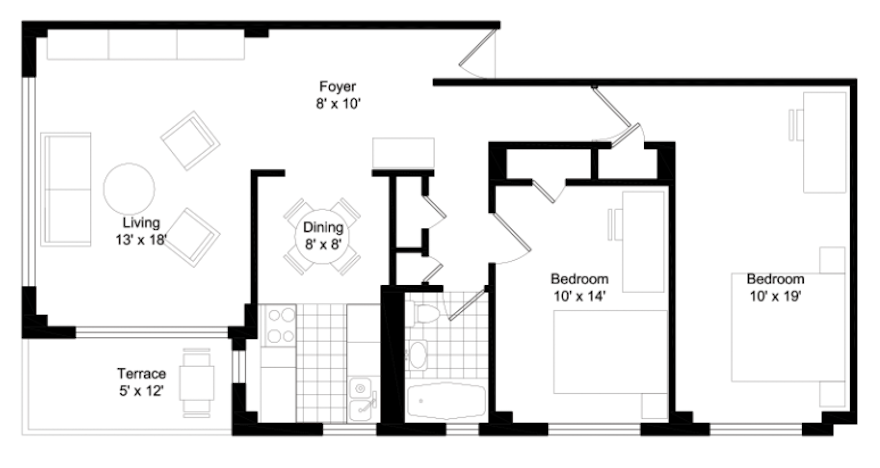 The Tate, a project built under the City’s rezoning of the High Line area, represents the return of private development to Chelsea. More than 300 apartments are contained in two long street-front buildings of 11 stories and 14 stories, framing an internal courtyard. Residents of the Tate, like those of London Terrace, pay high rents for relatively small apartments, with the tight spaces compensated for by extensive amenities and attentive management. The many small units with high ground coverage produce high population density.

The through-block development has more than fifty different floor plans, from studios to three-bedroom units. The two-bedroom model shown here is typical, with a small alcove kitchen, separated from the main living spaces, and two bathrooms. These modest units –with high prices – are a market standard in many New York neighborhoods. 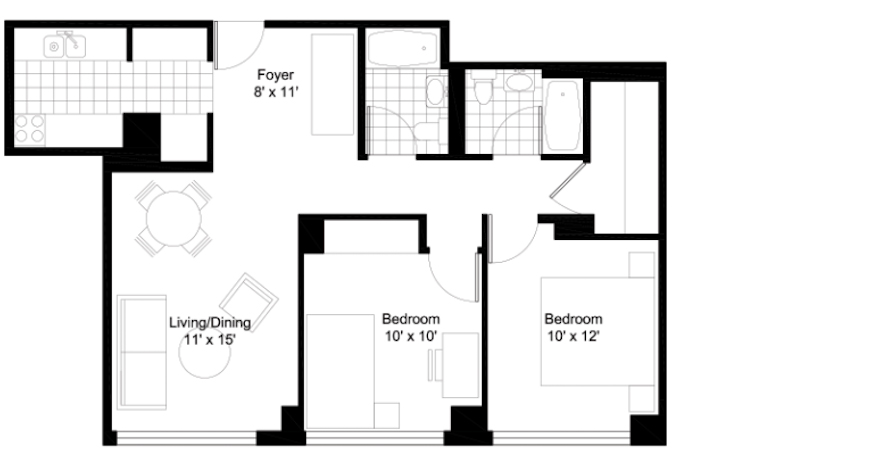