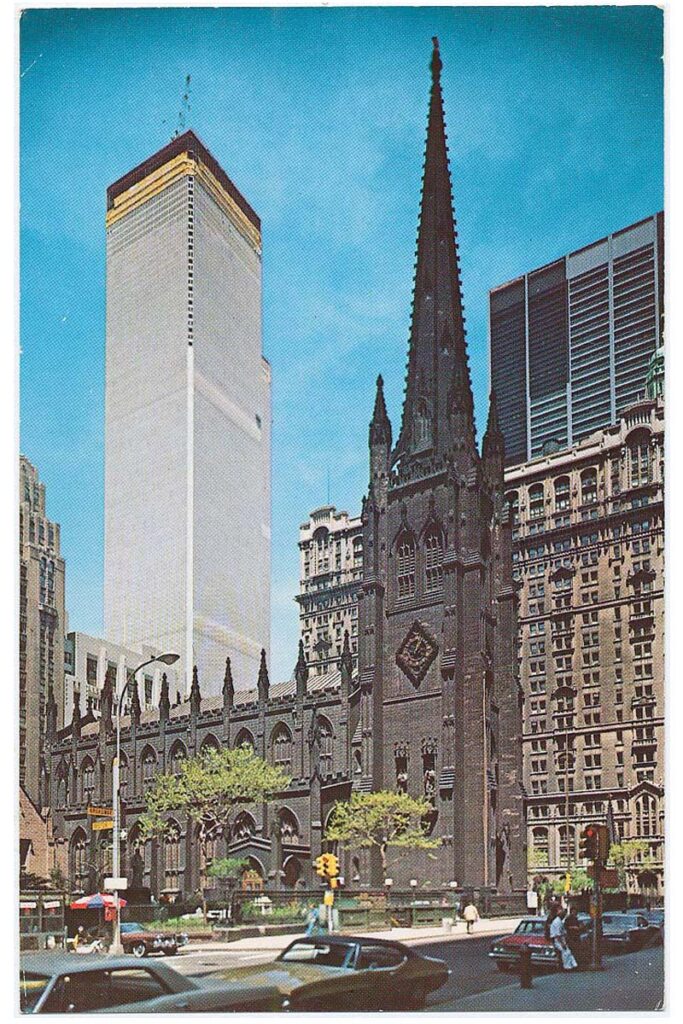 The World Trade Center was more than its signature twin towers: it was a complex of seven buildings on 16-acres, constructed and operated by the Port Authority of New York and New Jersey (PANYNJ). The towers, One and Two World Trade Center, rose at the heart of the complex, each climbing more than 100 feet higher than the silver mast of the Empire State Building.

Construction of a world trade facility had been under consideration since the end of WWII. In the late 1950s the Port Authority took interest in the project and in 1962 fixed its site on the west side of Lower Manhattan on a superblock bounded by Vesey, Liberty, Church and West Streets. Architect Minoru Yamasaki was selected to design the project; architects Emery Roth & Sons handled production work, and, at the request of Yamasaki, the firm of Worthington, Skilling, Helle and Jackson served as engineers.

The Port Authority envisioned a project with a total of 10 million square feet of office space. To achieve this, Yamasaki considered more than a hundred different building configurations before settling on the concept of twin towers and three lower-rise structures. Designed to be very tall to maximize the area of the plaza, the towers were initially to rise to only 80-90 stories. Only later was it decided to construct them as the world's tallest buildings, following a suggestion said to have originated with the Port Authority's public relations staff.

Yamasaki and engineers John Skilling and Les Robertson worked closely, and the relationship between the towers' design and structure was clear. Faced with the difficulties of building to unprecedented heights, the engineers employed an innovative structural model: a rigid "hollow tube" of closely spaced steel columns with floor trusses extended across to a central core. The columns, finished with a silver-colored aluminum alloy, were 18 3/4" wide and set only 22" apart, making the towers appear from afar to have no windows at all.

Also unique to the engineering design were its core and elevator system. The twin towers were the first supertall buildings designed without any masonry. Worried that the intense air pressure created by the buildingsÃ¢ high speed elevators might buckle conventional shafts, engineers designed a solution using a drywall system fixed to the reinforced steel core. For the elevators, to serve 110 stories with a traditional configuration would have required half the area of the lower stories be used for shaftways. Otis Elevators developed an express and local system, whereby passengers would change at "sky lobbies" on the 44th and 78th floors, halving the number of shaftways.

Construction began in 1966 and cost an estimated $1.5 billion. One World Trade Center was ready for its first tenants in late 1970, though the upper stories were not completed until 1972; Two World Trade Center was finished in 1973. Excavation to bedrock 70 feet below produced the material for the Battery Park City landfill project in the Hudson River. When complete, the Center met with mixed reviews, but at 1,368 and 1,362 feet and 110 stories each, the twin towers were the world's tallest, and largest, buildings until the Sears Tower surpassed them both in 1974.