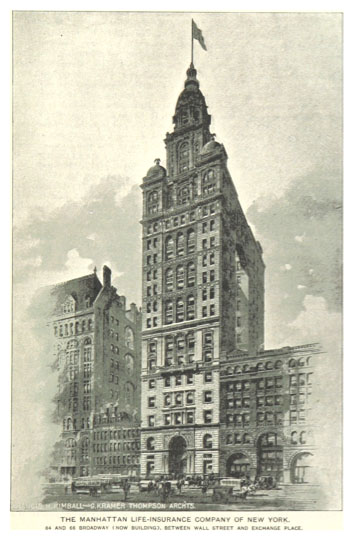 Wishing to create an architectural symbol to outshine its rivals, in 1892 the Manhattan Life Insurance Company held a competition for its new headquarters at 64-66 Broadway across from Trinity Church, selecting architects Kimball and Thompson. Partially speculative and thus a money-maker for the company as well as an image maker, the structure was intended to be the tallest in New York. When finished in 1894, the granite, terra-cotta, and brick-clad structure rose 348 feet above the sidewalk to the structure's lantern top. On its high floors a copper-clad iron bridge spanned the light court of the U- shaped building, which featured several engineering firsts, including the use of pneumatic caissons for the foundations, designed by engineer Charles Sooysmith. The interior was heated and cooled through one of the first uses of electric ventilation.

Though the building was widened by two additional bays in 1904, its size was eclipsed as quickly as its French Renaissance style. Manhattan Life was demolished in 1930 to make way for the Irving Trust Bank's headquarters, the Art Deco masterpiece One Wall Street.